Watson takes his second chance with both hands 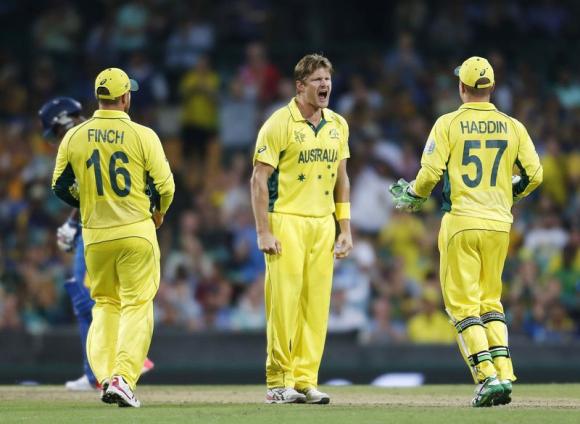 Watson takes his second chance with both hands

SYDNEY - The obituaries had been written only three days earlier, Shane Watson's 13-year international cricket career declared dead and buried. And yet at the Sydney Cricket Ground on Sunday, there was the unmistakeable figure of the Australian raising his bat in celebration of his 32nd one-day international half century. The 33-year-old was only the support act to Glenn Maxwell's brilliant 53-ball 102 in a match-winning partnership of 160, and his bowling later in the match was expensive at 1-71, but Watson was back, back, back. "I thought he played really well, yeah. His batting was how we know Watto can bat. He's got amazing power," said his captain Michael Clarke. "He played a big part in helping set the game up, that partnership between Maxi and him. He held his nerve under pressure with the ball as well." The death knell for the all-rounder's career had appeared to sound when he was left out of the team for Australia's fourth World Cup match against Afghanistan in Perth last Wednesday. He was omitted because of poor form, chief selector Rod Marsh said, and something would need to change going forward if he was to return to the side. 'Had his immediate return been confusing for Clarke and his team mates?' the Australia skipper was asked after the 64-run victory over Sri Lanka that put Australia through to the quarter-finals. Clarke, who had spent much of his pre-match news conference on Saturday emphasising that he was no longer a selector, grinned and mimed a fisherman reeling in his line. "I am not going there," he laughed. "The selectors pick the 11 players and my job is to get the best out of the 11 players. No chance am I getting hold of that hook. "The selectors made it pretty clear and I tried to make it clear at the toss of the coin that it was horses for courses in terms of selection today. "They went for the extra experience with Watto in the bowling department with only playing two front-line fast bowlers so that was a big part of why they made that call." Clarke had relegated Watson down the order to bat at number six, leaving the in-form Steve Smith in the crucial number three position. Watson's 86-ball 67 kept his one-day average above 40 and Maxwell at least was grateful for his experience and support as he scored his maiden one-day century. "He played beautifully, to see the way he hit the ball was special," said the 26-year-old. "It was a really special partnership we could have together ... it was a lot of fun." –Reuters