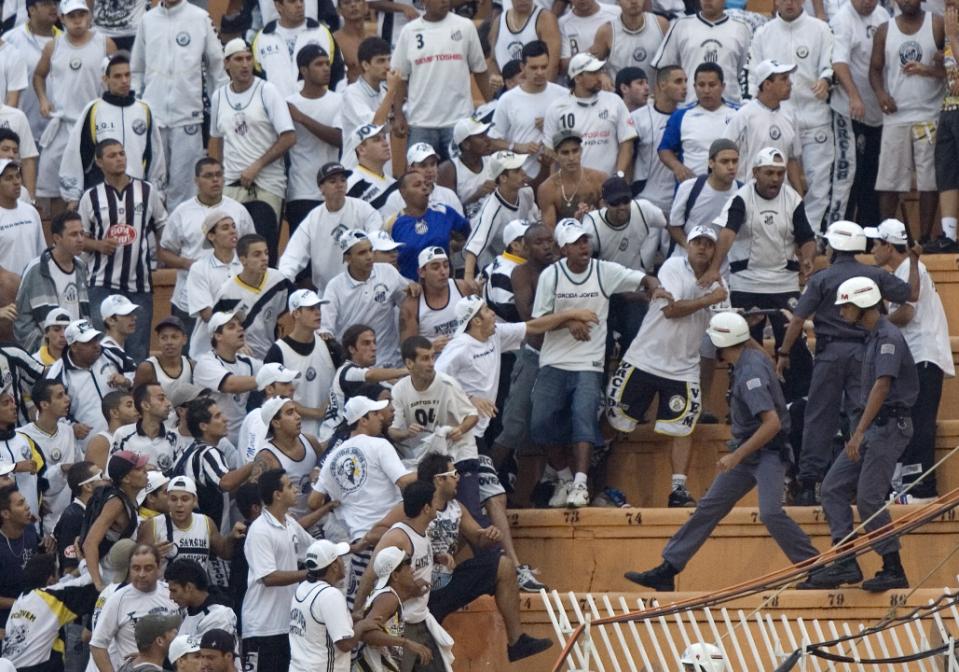 SAO PAULO (Web Desk) — Riot police, rubber bullets, tear gas, and stun bombs.Fan violence is endemic in Latin America, with Argentina usually hit the hardest. But in recent years, Brazil has been struggling the most with cases of violence inside and outside stadiums. Just weeks into the newest season, another wave of fan violence is exposing the chronic failure of club officials and local authorities to eradicate the decades-long problem. The latest incident was on Sunday, before a high-profile match at a new stadium in the heart of Sao Paulo. Riot police had to unleash their arsenal when Palmeiras fan groups tried to get too close to Corinthians fans. Rocks, beer bottles, and used iron bars were thrown in the confrontation. Around the stadium it looked like a combat zone, and many ticket-holders were unable to get into the game. Outdated stadiums, unprepared police, fan groups content to resort to violence, and weak laws against it provide a dangerous mix at Brazilian sporting events. Some believe the weekend tragedy in Egypt, where 22 people died in a stampede before a match, could happen in Brazil. "We can't forget that football is not isolated from the rest of society. So if it's a violent society in general, there is just so much that can be done in football," sports sociology specialist Felipe Tavares Paes Lopes says. "Of course, there are ways to improve the current situation, but it's not simple." Lopes' solutions include more committed preventive actions from the government, such as investment in education and dialogue with fans, investing in specialized police forces, and improving infrastructure in the vast majority of stadiums, including surveillance cameras. It could also help, he adds, to adopt anti-violence models that have worked in the likes of Germany and the Netherlands, where authorities have close relationships with radical fan groups, and where the police are better prepared for sports events. Lopes says Brazil's sports and justice ministries have working groups devoted solely to develop actions against fan violence, but very few are put into practice. The club Sport tried an unusual solution in Recife last weekend — it hired fans' mothers as stewards in a match. Wearing uniforms that said "Security Moms," the 30 mothers were part of an action to promote peace inside stadiums. There were no reports of fan trouble. "After all, no one wants to fight in front of a mother, especially his own," says Aricio Fortes, vice president of Ogilvy, the company that created the campaign. Back in Sao Paulo, local authorities and club directors blamed each other for the violence before the Palmeiras-Corinthians match. The game, the first between the fierce city rivals in Palmeiras' new stadium, was considered risky from the beginning, and public prosecutors recommended it be played without Corinthians fans. The local federation accepted the recommendation, then reversed its position after Corinthians sued and threatened not to play if its fans were blocked. "We warned that it would be safer to have only Palmeiras fans at the match," public prosecutor Paulo Castilho told Brazilian media. "We knew there could be trouble, and that's what happened." He says the violence should be blamed partly on Corinthians, which fought hard to allow its fans at the game. Fan groups are at the root of fan violence in Brazil. Most are partly financed by their clubs, receiving free tickets and free trips to away games. Authorities have been trying to ban the groups for years, but they keep coming back through legal loopholes. "For the past two years we've been saying that, because of the increase in violence in football, the best solution is to have these big games played without the visiting fans," Palmeiras president Paulo Nobre says. Nobre is one of the few club presidents who has cut relations with fans groups, a decision that leads to constant jeers at him during matches, and even threats against his personal safety. Corinthians president Mario Gobbi defended the club for wanting its supporters at the match, saying fan violence is not a problem that needs to be solved by the teams. He says it is the responsibility of police and public authorities to keep everyone safe inside and outside stadiums. "If we can't have a football match with fans from both teams in a stadium, then society is failing," says Gobbi, who also is a police investigator. "We need to worry about the causes of the problem, not the effects. We won't get rid of fan violence until we start providing better education and other basic needs to the population in general."