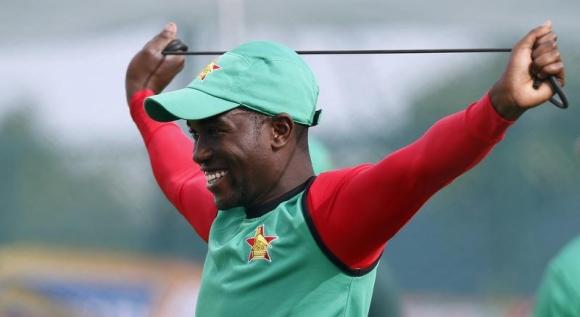 NELSON (REUTERS) - Zimbabwe took heart from their gutsy display against title contenders South Africa and will try to be "ruthless" against the United Arab Emirates, captain Elton Chigumbura said on Wednesday. Zimbabwe had the Proteas reeling at 83 for four before being put to the sword by a world record fifth-wicket unbroken stand of 256 between David Miller and JP Duminy. They were 214 for three and well set to push on for the final 15 overs in their chase of 340 before losing a flurry of wickets to be bowled out for 277. "It was a bit of both, a confidence boost the way we played, and obviously it's always disappointing to play the way we did for 90 overs but we didn't manage to finish off the last 10 overs," Chigumbura told reporters in Nelson. "We took a lot out of the game we played and hopefully we can carry on with that form. Playing the first game gave us the opportunity to try and correct where we went wrong from the first one. "The two days that we've got, we tried to polish that, and yeah, we're now looking forward to the UAE game," he said. "We have to take every game seriously and do the basics right and make sure that when you get into good winning position you are ruthless and win the game." Hamilton Masakadza's form has been another positive for the Zimbabwe side. The 31-year-old batsman scored an unbeaten 117 in their warm-up victory over Sri Lanka and followed it up with a 80 against South Africa. "The good thing about our team at the moment, everyone is in good nick, so we don't expect just Hamilton to put up a good performance," Chigumbura said. "The rest of the guys in the squad are capable of doing the same job." This will be the first one-day international between the two sides and UAE captain Mohammad Tauqir spelled out his team's ambition in the tournament. "See, every individual in the team has his own target and goals. Collectively we are looking forward to at least having a couple of wins against test nations," Tauqir said. "Predominantly it's an expat game in the UAE, a lot of Asian, a lot of English, Australian people play there, but I believe our participation in the World Cup would inspire many more Emirati nationals to follow the game with passion."