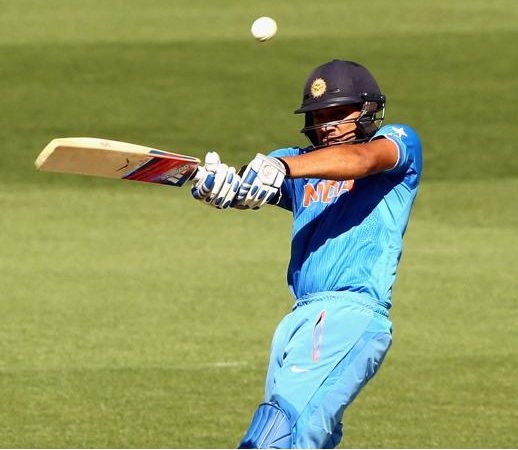 ADELAIDE (Web Desk) - Rohit Sharma smashed his way to a strokeful 150 while Ajinkya Rahane blasted an unbeaten 88 as India posted a huge 364 for five against Afghanistan in their second and final cricket World Cup warm up match at Adelaide today (Monday). Although the runs came against the weak attack of a minnow cricket nation but the struggling Indian batsmen badly needed runs under their belt, going into a crucial opening match against Pakistan. Suresh Raina was also among runs with a fiery 75 off 71 balls. Sharma and Raina added 158 runs for the third wicket, pulling India out of a horror start as they had lost opener Shikhar Dhawan (4) and key batsman Virat Kohli (5) within fourth over. Left-hander Dhawan had socred a half-century against Australia in the first warm-up game but Kohli yet again struggled, missing a chance to get his rhythm back before the main tournament starts. Sharma and Raina stroked comfortably, specially against the halpess Afghan spinners. They often charged down the wicket, took aerial route and cleared the boundaries with ease. Sharma hit 19 boundaries, including seven sixes in his punishing knock while Raina tormented the rival bowlers with five fours and three sixes. Following Raina's run out, diminutive Rahane walked to the crease and remained their till the end, scoring a confident 88 off just 61 balls, steeering India past 350-run mark. Skipper Mahendra Singh Dhoni yet again had a bad outing as he managed only 10 runs and did not score a single boundary in the 20 balls that he faced. Medium paceman Mirwais Ashraf (0/29) was the only Afghan bowler who managed an under-five economy rate in his six wicketless overs while others bled runs.