We are laying foundation of a new Pakistan, says Prime Minister Nawaz Sharif 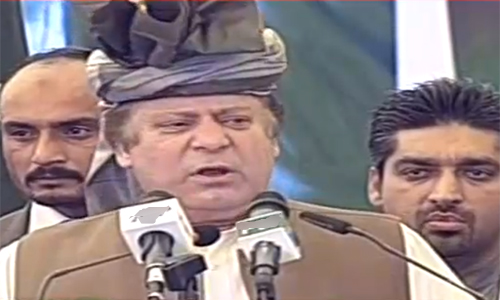 We are laying foundation of a new Pakistan, says Prime Minister Nawaz Sharif

PESHAWAR (92 News) – Prime Minister Nawaz Sharif has said that they have broken the backbone of terrorists. Addressing PML-N Workers' Convention on Thursday, he said that the operation will continue till the elimination of the last terrorist. Nawaz said that they had given an opportunity to the people getting more votes to form the government. He announced that the PML-N will participate in the local bodies’ elections. The prime minister said: “We want to see a new Khyber Pakhtunkhwa. We are laying the foundation of a new Pakistan.” He said that Lowari tunnel will be completed in two years. “Bhasha Dam, which is bigger than Mangla Dam, is being constructed.” Nawaz Sharif said that the shortage of gas and electricity will end soon. “People will get cheap electricity in their houses.” He said that the government will soon construct the motorway from Peshawar to Kabul. He resolved to wipe out terrorism.