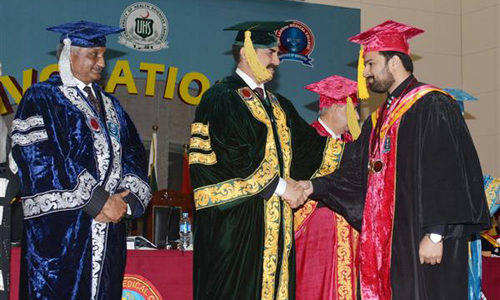 RAWALPINDI (92 News) – COAS General Raheel Sharif has said that Pakistan Army besides performing its role as custodian of national frontiers has always been a forerunner in terms of its contribution in national development, according to a press release issued by the ISPR. He was addressing the 3rd convocation of CMH Lahore Medical College on Saturday. General Raheel Sharif said that the entrenched role of Army Medical Corps in the forefronts during serious disasters, calamities and military operations against terrorism and extremism has been highly impressive. General Raheel Sharif said that physical, mental and social health is a prelude to a strong nation and provision of professional health services to the common man must be everyone's priority. The COAS said that extensive and continuous research is our national need without which no institution can achieve excellence. He stressed the need to have greater faith in the young generation as the future belonged to them. “We have to collectively put in efforts to give our next generation a terror-free country in order to provide them conducive environment to help them apply their knowledge and creativity to achieve optimum effects for national growth,” he said. “We are taking menace of terrorism head on and will go anywhere in the country to eliminate it in totality.” Later, the COAS awarded degrees and medals to the passing out students.