Pakistan have to defeat dangerous Ireland at all costs, says skipper Misbahul Haq 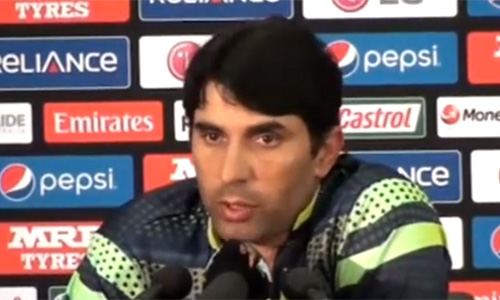 Pakistan have to defeat dangerous Ireland at all costs, says skipper Misbahul Haq

ADELAIDE – The vagaries of the World Cup draw may have helped Pakistan rediscover their swagger at just the right time to push them to the brink of a quarter-final, according to captain Misbahul Haq. Pakistan face Ireland in a must-win clash in Adelaide on Sunday with the winner finishing third in Pool B. "No doubt Ireland is a dangerous team (but) ...it is 2015, so we are not looking back to that," he said when asked of the 2007 loss. "We are focusing on tomorrow's game, that's it, and that is a must-win game for us," said Misbah. The loser of the match could still advance to a quarter-final against New Zealand in Wellington depending on the outcome of the West Indies-UAE game earlier in Napier. The 1992 champions had been woeful in their first two matches and then limped to a tense 20-run victory over Zimbabwe before they accounted for a stubborn UAE side by 129 runs. Those two victories built their confidence to a point where they were able to beat pre-tournament favourites South Africa by 29 runs on the Duckworth/Lewis method in a rain-effected match at Eden Park last Saturday. "We were playing against two tougher oppositions up front just at the start of the tournament and they played better cricket than us," Misbah said of their successive losses toIndia and West Indies. "Then after that we got, you could say, weaker sides, and we just got our momentum back and got our confidence back. "When you are against tougher sides at the start sometimes (you) lose your confidence and momentum. But as we get back into a winning situation, the confidence and momentum is back." The Pakistani captain felt his trio of pace bowlers, Wahab Riaz, Sohail Khan and Mohammad Irfan had kept his side in the tournament. They have combined for 28 of the 38 wickets his side have taken and UAE captain Mohammad Tauqir said his team felt they were as good as South Africa's attack of Vernon Philander, Morne Morkel and Dale Steyn. "The pacers are really bowling well," Misbah added. "All of them are wicket-takers, aggressive bowlers. And that's what we need if we are not batting well. "All the pacers are really doing their job getting wickets, putting pressure on the opposition." Misbah will need them to exert that pressure on Ireland to ensure they do not suffer the same fate as the side who were knocked out of the 2007 World Cup when they lost their clash in Kingston by three wickets. Factbox  Pakistan  Coach: Waqar Younis Squad: Misbahul Haq (captain), Nasir Jamshed, Ahmed Shehzad, Haris Sohail, Sohaib Maqsood, Umar Akmal, Shahid Afridi, Wahab Riaz, Sohail Khan, Rahat Ali, Muhammad Irfan, Younis Khan, Safraz Ahmed, Yasir Shah, Ehsan Adil. Results so far at 2015 World Cup: Lost to India by 76 runs Lost to West Indies by 150 runs Beat Zimbabwe by 20 runs Beat UAE by 129 runs Beat South Africa by 29 runs (Duckworth-Lewis) Best performers: Misbahul Haq (277 runs); Wahab Riaz (11 wickets) Ireland Squad: William Porterfield (captain), Paul Stirling, Ed Joyce, Niall O'Brien, Andrew Balbirnie, Gary Wilson, Kevin O'Brien, John Mooney, George Dockrell, Max Sorensen, Andrew McBrine, Peter Chase, Alex Cusack, Stuart Thompson, Craig Young Results so far at 2015 World Cup: Beat West Indies by four wickets Beat UAE by two wickets Lost to South Africa by 201 runs Beat Zimbabwe by five runs Lost to India by 8 wickets Best performers: Ed Joyce (235 runs); Alex Cusack, Kevin O'Brien (six wickets) Pakistan v Ireland head-to-head Total played: five Pakistan won three, Ireland won one, tied one. Last match: Pakistan won by two wickets at Dublin on May 26, 2013.