We still see two results on the board: Aaron Finch

We still see two results on the board: Aaron Finch

DUBAI (92 News) - It was just some really good bowling, says Aaron Finch of Mohammad Abbas, whose five-for has put Pakistan in pole position to win the Abu Dhabi Test.

In what has been a low-scoring second Test so far, paceman Abbas has stood out, head and shoulders above the other bowlers on view. Pakistan managed just 282 in their first innings, but with Abbas returning 5/33, Australia could only put up 145 in their first hit before Fakhar Zaman and Azhar Ali hit half-centuries to take Pakistan to 144/2 in their second, 281 ahead already with three days left. “I wouldn’t say deflated, I think that there was obviously the feeling that we let them off the hook a little bit yesterday. I think that the way Zaman and Sarfraz (Ahmed) batted (in the first innings) – very positive and tried to change the momentum of the game that way – was great by them,” said Finch. “And today, we seemed to be losing those one-hour periods – there seemed to be a big collapse. If we can limit that to one wicket and start building a partnership, we can start chipping away longer and longer. But we know that the challenges that you have in these conditions when a new batter comes in against quality spinners and particularly a quality fast bowler. “So yeah, it’s been a disappointing couple of days but the camp’s positive. We managed to scrap through for a brilliant draw in the first Test, so we still see two results on the board.”

We managed to scrap through for a brilliant draw in the first Test, so we still see two results on the board

Finch, who scored 62 and 49 in the first Test – also his debut – was Australia’s top-scorer with 39 in Abu Dhabi, and batting for around two hours meant he got to see a fair bit of what Abbas had to offer. “Mohammad Abbas didn’t miss the stumps too often. He always bowls a good length. So it’s up to us to try and negate that, especially in the second dig. We’ve come up with some really good plans against him. He’s bowled well in the last couple of innings against us, so I don’t think it’s the amount of seam or anything like that, it was just some really good bowling,” said Finch, clearly impressed. 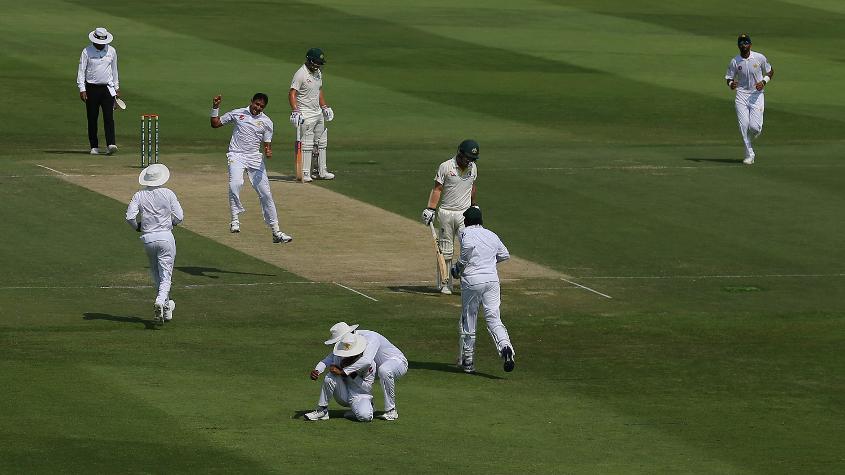 “It’s nothing that none of us have not seen before. I suppose a little bit of seam there, particularly to a new batter, is so important. Coming wide of the crease to the left-handers, seaming it across and then around the wicket, and that’s the most difficult ball to face, if someone is angling the ball in at the stumps. “And we know that he’s always there and thereabouts at the stumps. He doesn’t go over the stumps, he doesn’t miss them too often, so yeah, that does have its challenges. But I’m sure in the second innings we’ll get that right.” Australia are playing catch-up in Abu Dhabi, of that there’s no doubt. Not too different from the first game, when Pakistan scored 482 and then bowled Australia out for 202 before Usman Khawaja led a superb rearguard to salvage a draw. “The first innings is always key to set up the game,” agreed Finch. “We’ve seen Pakistan in the first Test go really big in the first innings and that gives them the freedom in the second innings to play as aggressively as they want to or as conservatively as they want to and the game’s in your hand – you can pull out when you want and declare. “Same again in this game. We’ve left ourselves little bit too far behind the game. So soon as Zaman comes out and plays aggressively and takes the game away in a few overs, you’re unsure whether to keep your catchers in or you retreat and try to control the scoreboard. “That’s the beauty of going big in your first innings. You control the game. And it goes a long way to winning games, if you’re setting up that first innings.”