We want peace with neighbouring countries, but know how to counter aggression: Nawaz Sharif 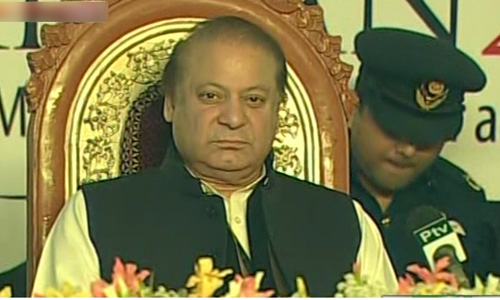 We want peace with neighbouring countries, but know how to counter aggression: Nawaz Sharif

*Vows to increase exports to US$50 billion in next three years *Says Bhasha Dam to be completed by 2020 KARACHI (92 News) Prime Minister Nawaz Sharif has said that Pakistan wants peace with neighbouring countries and knows how to counter aggression as well. Talking to the media after inaugurating the international trade exhibition on Thursday, he said that the exhibition is the reflection of Pakistan’s industrial culture. “We have succeeded in attracting foreign investors through the exhibition.” He expressed his resolve to increase exports to US$50 billion in the next three years. He said that economic growth is the top priority of the government. “Pakistan has inked agreements of free trade with China and Sri Lanka.” The prime minister said that the process of tax payment is being made easy. “We are striving to overcome the power crisis. We will soon start the Bhasha Dam, which will be completed by 2020,” he added. “We are fighting against all terrorists fomenting anarchy in the country.” He said that saboteurs will not be spared at all costs. He questioned why the decision to launch an operation in Karachi was made earlier. “Karachi will soon be the centre of peace. No one will have the gun except the state.” Earlier, the prime minister inaugurated the fourth squadron of Pakistan Air Force (PAF) comprising of Korakaram, Eagle and AWACAS aircraft, which were purchased from China, at Masroor Airbase. Speaking on the occasion, he said that the PAF has always come up with the hopes of the nation in every hour of trial. “PAF’s history is replete with achievements of gallantry.” The prime minister also inspected the parade. He was welcomed by Sindh Chief Minister Syed Qaim Ali Shah and Governor Ishratul Ibad at the airport.