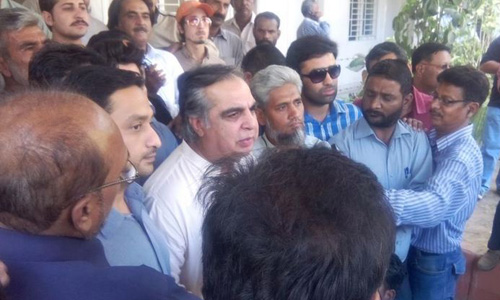 KARACHI (92 News) – Pakistan Tehreek-e-Insaf leader Imran Ismail has said that they will smash the idols of fear in Karachi and the MQM will suffer a defeat in the NA-246 by-poll. In a statement on Tuesday, he said that he will register the FIR against people involved in attacking him at Jinnah Ground, Azizabad. “No one can stop the PTI from holding a meeting in Jinnah Ground,” he said. Imran Ismail, a PTI candidate in the NA-246 by-poll, said that they are not afraid of anyone. He said that they had gone to Jinnah Ground to make arrangements for the April 19 meeting when the MQM goons attacked them. "Several PTI workers have been injured in the attack," he added. Meanwhile, the Azizabad SHO has been suspended after the incident.