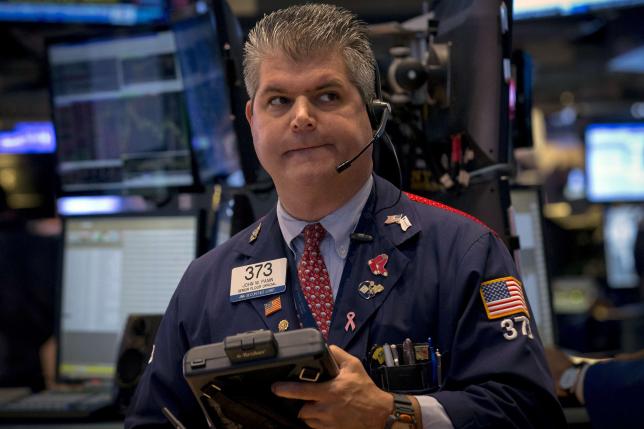 NEW YORK - US stocks fell on Monday as oil prices touched a six-month low and factory data from China raised concerns about the world's second-biggest economy. Energy stocks were the biggest losers among the main S&P sectors, recording their worst three-day decline in seven months. Exxon Mobil (XOM.N) and Chevron (CVX.N), which also reported poor results on Friday, led the losses. Oil prices fell on fresh evidence of growing oversupply and data highlighting slowing demand in China. Crude prices are now on course for their weakest third-quarter performance since the financial crisis in 2008. [O/R] In US data, consumer spending recorded its smallest gain in four months, while the pace of growth in the manufacturing sector slowed in July. China's factory activity shrank more than initially estimated last month, according to a survey. Concerns about China's economy hurt US industrial stocks as well as Apple (AAPL.O), which relies on that country for much of its iPhone sales. A report from market research firm Canalys showed Apple lost some smartphone market share in China in the second quarter and its stock was down 2.23 percent, weighing most on the Nasdaq and the S&P 500. "It's a combination of the energy stocks, then the industrials and now the tech stocks, which have joined on the downside," said Donald Selkin, chief market strategist at National Securities in New York, which has about $3 billion in assets under management. At 2:30 pm the Dow Jones industrial average .DJI was down 0.99 percent at 17,514.92. The S&P 500 .SPX lost 0.69 percent to 2,089.29 and the Nasdaq Composite .IXIC dropped 0.64 percent to 5,095.24. Nine of the 10 major S&P sectors were lower, with the utilities index .SPLRCU the lone gainer. Investors awaited another batch of earnings this week, with AIG (AIG.N), Allstate (ALL.N) and General Growth Properties (GGP.N) due to report after the market closes on Monday. Tyson Foods (TSN.N) shares fell 9.5 percent after the biggest US meat processor cut its profit forecast for the year, citing export market disruptions in its beef business and high cattle costs. Peabody Energy (BTU.N) fell 9.6 percent as President Barack Obama prepares to unveil the final version of his plan to tackle greenhouse gases from coal-fired power plants. Declining issues outnumbered advancing ones on the NYSE by 2.13 to 1. On the Nasdaq, that ratio was 2.35 to 1 favoring decliners. The benchmark S&P 500 index was posting 22 new 52-week highs and 23 new lows; the Nasdaq Composite was recording 72 new highs and 122 new lows. - REUTERS