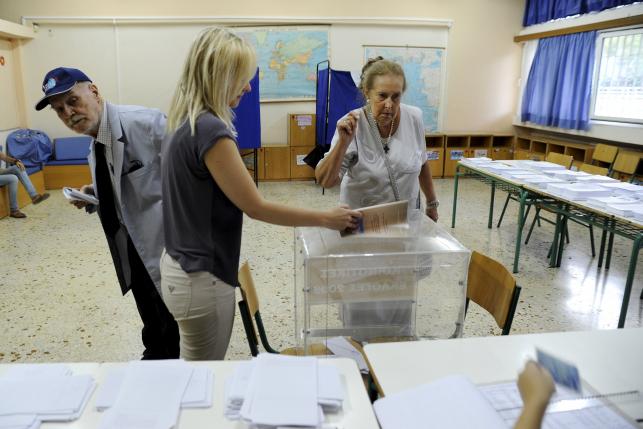 ATHENS - Early voters in Greece were thin on the ground on Sunday to elect a government they will entrust with the daunting task of steering the country through painful bailout reforms and meeting the challenge of a growing refugee crisis. Alexis Tsipras, the firebrand leftist who lost his bitter fight with Europe's establishment to end harsh economic austerity against his country, seeks re-election a month after he resigned as prime minister. Final polls on Friday showed the race too close to call between his Syriza party and the conservative New Democracy party of Vangelis Meimarakis, who accuses his rival of crippling the economy. Many Greeks, called to vote in a second national election this year, are disillusioned with a political process that has cut living standards and failed to tackle sky-high unemployment. "What we are hoping for is for the less useless (politician) so he does the least damage to Greece," said 77-year-old Yiannis outside a polling station in Athens. Voting started at 0400 GMT but around two and a half hours later turnout was still at a pace that appeared lower than in recent elections. Polling is scheduled to end at 1600 GMT, followed immediately by an exit poll and with an early vote projection expected by 1800 GMT. Just under 10 million Greeks are eligible to vote. Opinion polls suggest Tsipras may have the edge, but so narrow a one that a win for Meimarakis would not be surprising. But neither Syriza or New Democracy is expected to get the roughly 38 percent of the vote generally seen as needed for a clear majority in the 300-seat parliament. That means whoever gets the most votes - and a 50-seat bonus that goes with it - will need to form a coalition, probably with one or both of the small centrist To Potami and socialist PASOK parties. The election is being watched closely outside Greece because the winner will need to oversee deep economic reforms required for an 86-billion-euro ($98-billion) bailout Tsipras was forced to broker in August with Athens' euro zone partners. MIGRANTS The new government will also need to handle growing refugee inflows, with a painful reminder of that crisis served up on Sunday morning as the Greek coastguard said 26 people were missing after a dinghy capsized off the island of Lesbos. Another 13 were missing after a similar incident on Saturday, in which a five year old girl died. On the European Union's easternmost border, Greece has been the main gateway for hundreds of thousands of migrants making their way to the bloc, triggering border shutdowns and bitter recriminations among EU member states for not pulling their weight in one of the worst humanitarian crises in decades. Under Syriza, Greece shut down detention centres for migrants, opening reception centres where people are processed, and then free to move on. But thousands are moving under the radar. New Democracy says an apparent lack of policy from Syriza is stoking the crisis. "We need a clear distinction between refugees and migrants...be unrelenting with people traffickers and not convey the message this is a free for all," Meimarakis told supporters in his last large campaign rally on Sept.17. Greece has done little to stop migrants or refugees entering the country, which has a 16,000 kilometre-long coastal border, and the human cost of the crisis is escalating. -Reuters