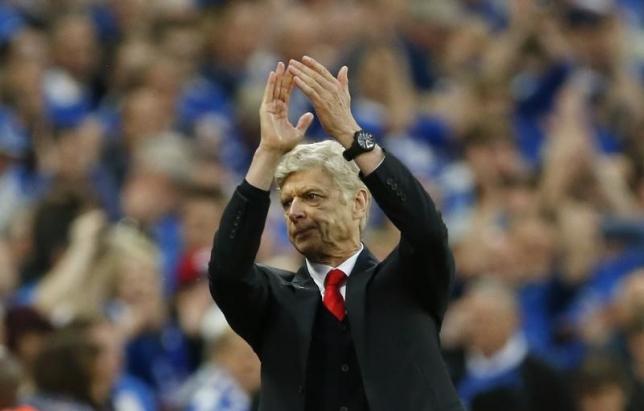 LONDON - Arsene Wenger gets another chance to finally beat his old nemesis and keep the Premier League title race alive for a little longer when Arsenal host leaders Chelsea on Sunday. For all the Frenchman's achievements during his long reign in north London, he has never enjoyed a win against a side managed by Jose Mourinho. Five draws and seven defeats, the last of which was an acrimonious 2-0 reverse at Stamford Bridge when Wenger became embroiled in a touchline spat with Mourinho, is a miserable record that Wenger is desperate to improve. A first victory on Sunday at The Emirates would slow, if only temporarily, Chelsea's charge towards a first English title since 2010 and keep alive Arsenal's remote hopes of ending their own, much longer, wait for the Premier League silverware. With both sides having six games to play, Chelsea are 10 points clear of Arsenal and 11 ahead of Manchester United, who have only five games remaining. Victory for Chelsea, and again at Leicester City on Wednesday, would see them clinch the title, Mourinho's third at Stamford Bridge after his back-to-back triumphs from 2005-06 during his first stint in charge. Wenger's team are on an eight-match winning run in the Premier League and although they have struck title-winning form too late, victory over Chelsea would be sweet. "Let's finish this season well. We have six games, a big game next weekend, and I believe we have the spirit, which is encouraged by the results," Wenger, whose side will play Aston Villa in the FA Cup final, said. "That's what we have to produce until the end." Former Arsenal midfielder Cesc Fabregas will return to the Emirates for the first time since joining Chelsea from Barcelona last summer and will be prepared for the boos. Although the Spaniard's only concern is collecting three more points towards his first English title, having never achieved it in eight years with Arsenal. "We are level on games now, we are 10 points in front and we don't want to give them hope to put pressure on us," he said. "It's been five years for (Chelsea) without winning the Premier League title; for me it's been 27 years so I'd love to win it as soon as possible." Who will finish second, third and fourth is much harder to predict. United face Everton on Sunday while Man City, two points behind Arsenal, can go second for 24 hours at least if they beat Aston Villa on Saturday. In the survival battle at the other end of the table, bottom club Burnley host 18th placed Leicester, while 19th placed Queens Park Rangers host West Ham United. - Reuters