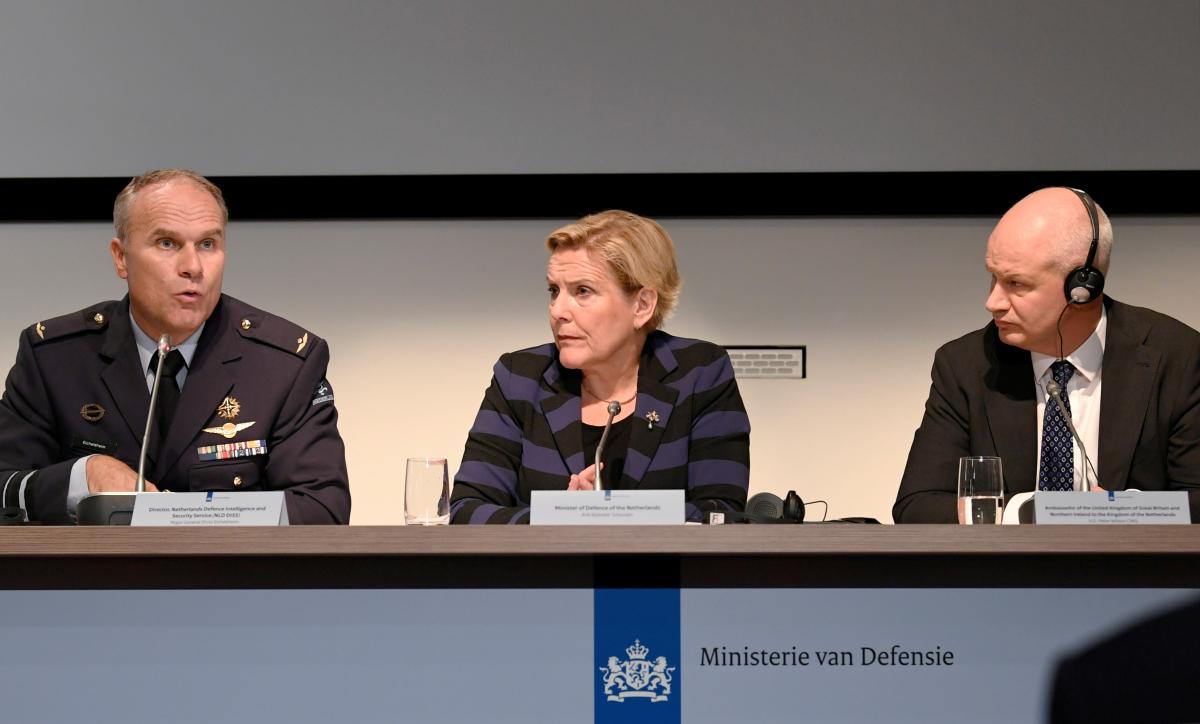 LONDON/THE HAGUE/WASHINGTON (Reuters) - Western countries issued coordinated denunciations of Russia on Thursday for running what they described as a global hacking campaign, targeting institutions from sports anti-doping bodies to a nuclear power company and the chemical weapons watchdog.
In some of the strongest language aimed at Moscow since the Cold War, Britain said Russia had become a “pariah state”. The United States said Moscow must be made to pay the price for its actions. And their allies around the world issued stark assessments of what they described as a campaign of hacking by Russia’s GRU military intelligence agency. Russia denied what its Foreign Ministry spokeswoman called a “diabolical perfume cocktail” of allegations dreamt up by someone with a “rich imagination”. But the accusations deepen Moscow’s isolation at a time when its diplomatic ties with the West have been downgraded over the poisoning of an ex-spy and while it is under U.S. and EU sanctions over actions in Ukraine. Britain and the Netherlands accused Russia of sending agents with wifi antennas to the Hague to try to hack into the Organization for the Prohibition of Chemical Weapons (OPCW) while it was investigating an attack on an ex-spy in England. The United States indicted seven suspected Russian agents for conspiring to hack computers and steal data to delegitimise international anti-doping organisations and punish officials who had revealed a Russian state-sponsored athlete doping program. They were also accused of trying to hack into Westinghouse Electric Co, a nuclear power company that provides atomic fuel and plant designs. The Justice Department said one of the Russians performed reconnaissance of personnel and stole login credentials at the company. Three of the seven had already been indicted by the special prosecutor investigating allegations of Russian meddling in the 2016 US presidential election, which Moscow denies. The various accusations were announced at briefings around the globe that were held as NATO defence ministers gathered in Brussels to present a united front to their Cold War-era foe. “This is not the actions of a great power, these are the actions of a pariah state,” British Defence Secretary Gavin Williamson told reporters. US Defence Secretary Jim Mattis, at a news conference in the Belgian capital, said Russia must pay a price, and a number of response options were available. EU officials said in a statement Russia’s “aggressive act demonstrated contempt for the solemn purpose” of the OPCW. Australia, New Zealand and Canada were among other countries to issue strongly worded statements backing their allies’ findings. Russian officials portrayed the allegations as part of an anti-Russian campaign intended to entrench Moscow’s reputation as an enemy. Accusations against Russia “know no limits”, said Deputy Foreign Minister Sergei Ryabkov. Dutch authorities said they had disrupted the attempt to hack into the Hague-based OPCW in April, a time when the watchdog was looking into both the attack on ex-spy Sergei Skripal in Britain and chemical strikes in Syria that the West has blamed on Russia’s ally President Bashar al-Assad. Four Russians arrived in the Netherlands on April 10 and were caught three days later with spying equipment at a hotel located next to the OPCW headquarters, the Dutch military intelligence agency said. The men had planned to travel on to a laboratory in Spiez, Switzerland used by the OPCW to analyse samples. Instead, they were expelled to Russia. The Netherlands released copies of passports of the four, which identified them as Alexey Minin, Oleg Sotnikov, Evgenii Serebriakov and Aleksei Morenets, all in their 30s or 40s. Reuters was not immediately able to contact them.

Earlier on Thursday, Britain released an assessment based on work by its National Cyber Security Centre (NCSC), which cast Russia’s GRU military intelligence agency as a cyber aggressor which used a network of hackers to sow worldwide discord. The GRU, Britain said, was almost certainly behind the BadRabbit and World Anti-Doping Agency hacking attacks of 2017, the hack of the U.S. Democratic National Committee (DNC) in 2016 and the theft of emails from a UK-based TV station in 2015. “The GRU’s actions are reckless and indiscriminate: they try to undermine and interfere in elections in other countries,” said British Foreign Secretary Jeremy Hunt. “Our message is clear - together with our allies, we will expose and respond to the GRU’s attempts to undermine international stability.” The GRU, now formally known in Russia by a shorter acronym GU, is the agency Britain has blamed for sending two agents to kill Skripal — himself a former GRU agent — with a nerve agent sprayed on his door. Russia says the two men were sightseers who visited Skripal’s home town twice on a weekend trip to England. Skripal, his daughter and a police officer fell seriously ill and a British woman later died from poison her partner found in a discarded perfume bottle. After the Skripal poisoning, dozens of Western countries launched the biggest expulsion of Russian spies working under diplomatic cover since the height of the Cold War. Moscow replied with expulsions of Westerners. In a separate case on Thursday, a Norwegian court extended for a second two-week period the detention of a Russian citizen suspected of spying on Norway’s parliament. Norway arrested Mikhail Bochkaryov on Sept. 21 as he was about to fly out of the country. Moscow says he is a Russian parliamentary staff member and has demanded Oslo lift the “absurd charges”. Britain said the GRU was associated with a host of hackers including APT 28, Fancy Bear, Sofacy, Pawnstorm, Sednit, CyberCaliphate, Cyber Berkut and Voodoo Bear. The United States has sanctioned GRU officers including its chief, Igor Korobov, in 2016 and 2018 for attempted interference in the 2016 US election and cyber attacks.