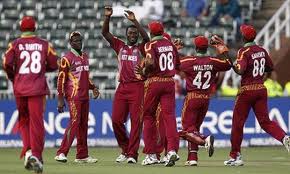 CHRISTCHURCH (Reuters) - A spell of destructive fast bowling and a fine all-round performance from Andre Russell restored Caribbean smiles and laughter to the West Indies dressing room on Saturday. Four wickets for one run after Russell had helped his team past the 300 mark in the cricket World Cup Group B match against Pakistan put West Indies in total control. Russell was named man-of-the-match for his unbeaten 42 from 17 balls followed by figures of 3-33 from eight lively overs as he spearheaded the emphatic 150-run victory. After losing to associate members Ireland in their opening match, the 1975 and 1979 had plenty to prove at Hagley Oval. While not totally convincing, they did show they could beat one of the leading nations even though their most destructive batsman Chris Gayle is still struggling to find his form. Russell told a news conference there had been laughter and high spirits in a happy dressing room after the crushing win. "We want to show the world that we are a good team and we can fight," he said. "Everyone contributed." Russell, who at one stage struck three sixes in four balls, said he liked coming to the wicket with five to 10 overs remaining. "I think I can play my natural game from there," he said. "The way the game was set up was perfect for me to finish the innings off."     Scores: West Indies 310 for 6 (Ramdin 51, Simmons 50, Russell 42) beat Pakistan 160 (Akmal 59, Maqsood 50, Taylor 3-15, Russell 3-33) by 150 runs.