West Indies have much to lose against UAE, says skipper Tauqir 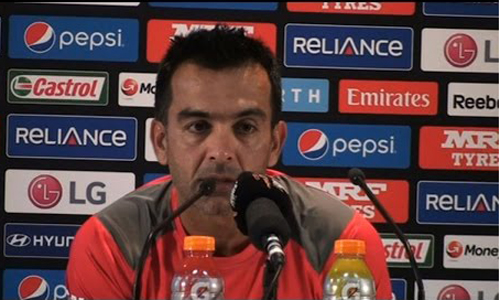 West Indies have much to lose against UAE, says skipper Tauqir

NAPIER - The United Arab Emirates have sensed an inconsistent West Indies side could be ripe for the taking in their final World Cup Pool B match in Napier on Sunday, UAE captain Mohammad Tauqir has said. West Indies need a big win at McLean Park on Sunday to ensure they qualify for the quarter-finals and offload the pressure to Ireland and Pakistan, who clash in the final match of the pool phase in Adelaide later that day. Jason Holder's team have four points from two wins, while Pakistan and Ireland have each won three, though the Irish have an inferior run rate to the other two sides. "West Indies will be under the pressure of getting qualified for the knockout," Tauqir told reporters in Napier on Saturday. "They're not playing as consistent cricket as they should be (and) ... I think they'll be under pressure of chasing the run rate. "I think it gives us an opportunity to play freely and express ourselves either batting or bowling." UAE have lost all five of their pool matches so far and while they have occasionally shown they can compete at international level, they do not have the skills required to put sides under consistent pressure. They were hammered by India by nine wickets in Perth on Feb. 28 and appeared to change focus for their last two games against Pakistan and South Africa, playing not to be embarrassed rather than playing to win. Tauqir said his side were more interested in how they played the game. "Of course a win is important, but it's not everything," Tauqir said. "I think playing good cricket is equally important, and we have been playing good cricket. "We started the tournament well, the two games against Zimbabwe and Ireland. "I think we had one bad game against India, but I would say even two games against Pakistan and South Africa was a decent performance from our side. "Although we wanted to win one or two games, we came very close but it didn't happen. But we're still looking forward to tomorrow's game and end it on a high." –Reuters