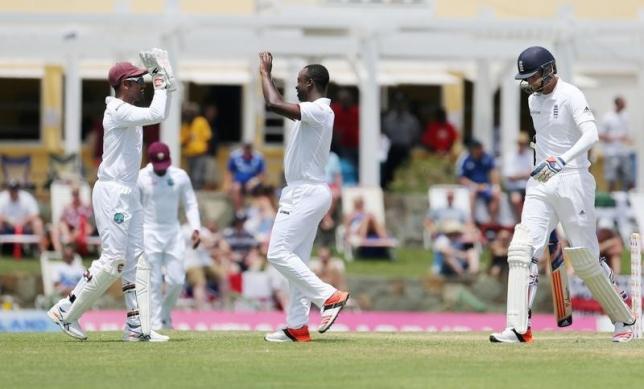 SAINT PETER'S - West Indies trailed England by 244 runs at the close of the second day of the first test in Antigua on Tuesday after Shivnarine Chanderpaul applied the brakes to any potential batting slumps. England will feel in control of the test but new West Indies coach Phil Simmons will also be encouraged by the way his team avoided the kind of middle order slump that has hampered them in recent years. England were bowled out for 399 just before lunch then made good inroads to reduce the Caribbean side to 99 for four. But the 40-year-old Chanderpaul (29 not out), supported by Jermaine Blackwood (30 not out), produced a characteristically disciplined innings to take West Indies to 155 for four at the close. England's James Anderson, in his 100th test, claimed the early wicket of Devon Smith for 11, the left-hander edging to Jos Buttler. Buttler then pocketed another catch to remove Darren Bravo (10), who edged as he tried to let go a delivery from Chris Jordan, to leave West Indies at 42 for two. Kraigg Brathwaite and Marlon Samuels steadied West Indies to 84 for two at tea but frustratingly for skipper Denesh Ramdin, neither batsman were able to capitalise. A leg-cutter from Stuart Broad lured Samuels (33) into an edge to Buttler and then Brathwaite (39) was brilliantly caught by Chris Jordan at slip from off-spinner James Tredwell before Chanderpaul and Blackwood took them to stumps. The hosts had earlier mopped up the England tail, claiming the last five wickets for 42 runs. Jerome Taylor started off with the early wicket of Ben Stokes (79) who was caught by Jason Holder at gully. Holder then removed nightwatchman Tredwell, who edged an attempted drive to Darren Bravo at first slip. Seamer Kemar Roach removed Buttler for a duck after his edge off a full length delivery was snaffled up by wicketkeeper Ramdin, then Broad found Jermaine Blackwood at point from another full delivery to leave England 361 for nine. The last wicket pair of Chris Jordan (21 not out) and James Anderson (20) added 38, the third biggest partnership in the England innings, before Anderson mistimed a shot from Marlon Samuels' off-spin to Holder at short cover. Roach finished with four for 94. - Reuters