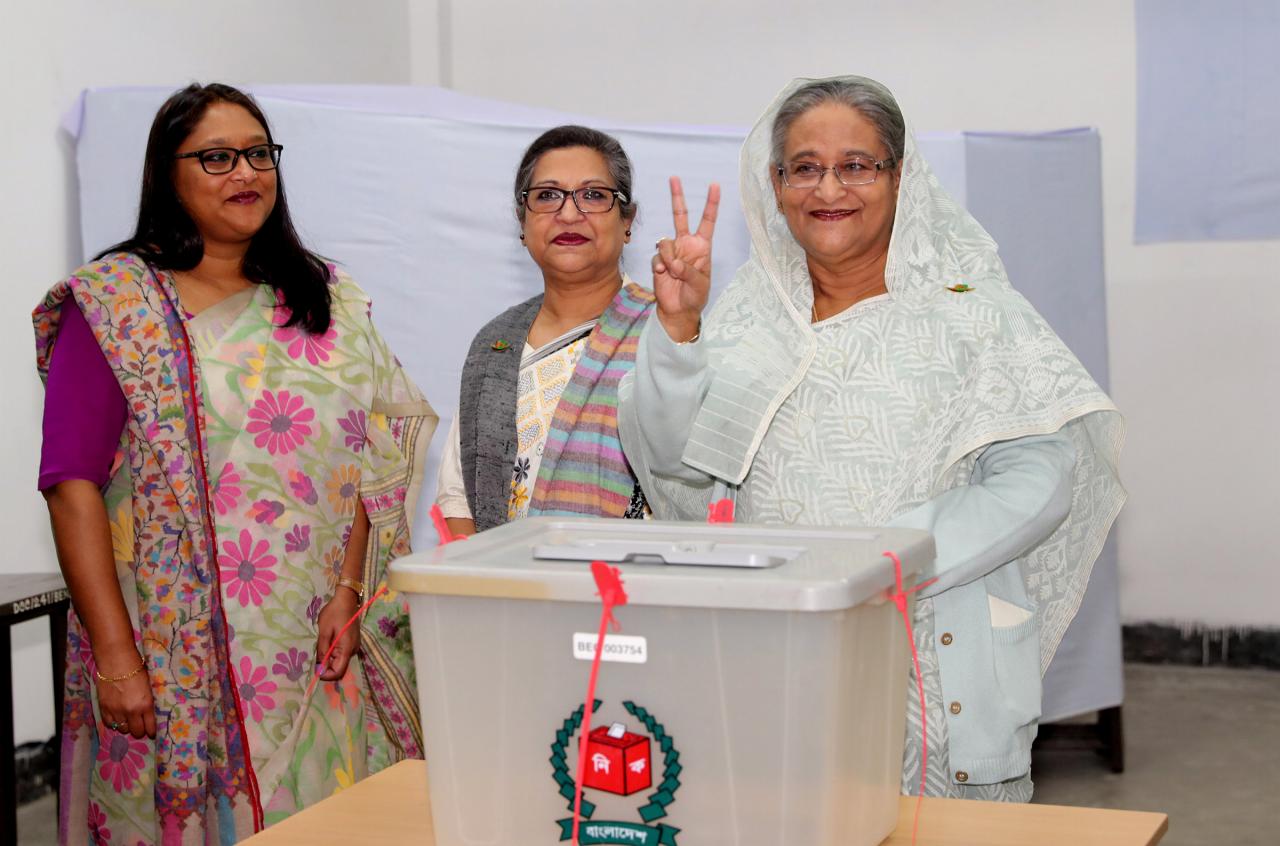 DHAKA (Reuters) - Western powers on Tuesday condemned election day violence in Bangladesh and described a range of other irregularities that marred a vote in which Prime Minister Sheikh Hasina’s alliance secured more than 90 percent of parliamentary seats. The strongly-worded assessments from the UK, European Union, and United States could hit the image of Hasina, who won a third straight term to power following Sunday’s election. Hasina’s opponents have rejected the election result, citing what they describe as widespread rigging and voter intimidation. She has denied impropriety, calling it a peaceful vote that saw enthusiastic participation from her supporters. The capital Dhaka was quiet on Tuesday, but the main opposition Bangladesh Nationalist Party (BNP) said its workers were being attacked in several areas elsewhere in the country by activists of the Awami League - charges the party denied. “Violence has marred the election day, and significant obstacles to a level playing field remained in place throughout the process and have tainted the electoral campaign and the vote,” the EU said in a statement, calling for “a proper examination of allegations of irregularities”. The United States, Bangladesh’s largest foreign investor, expressed concern about “credible reports of harassment, intimidation, and violence in the pre-election period that made it difficult for many opposition candidates and their supporters to meet, hold rallies, and campaign freely.” “We are also concerned that election-day irregularities prevented some people from voting, which undermined faith in the electoral process,” it said. The UK’s Minister of State for Asia and the Pacific Mark Field echoed the concerns, saying he was “aware of credible accounts of obstacles, including arrests, that constrained or prevented campaigning by opposition parties. “I urge a full, credible and transparent resolution of all complaints related to the conduct of the elections,” he said. Police say at least 17 people were killed in election day clashes between supporters and opponents of Hasina’s Awami League. The two sides, which have competed for power often violently for decades, traded blame for the election day unrest. Opposition BNP Secretary General Mirza Fakhrul Islam said he was collecting reports of rigging to submit to the Election Commission to demand a fresh vote. The commission already rejected that plea, but Islam said: “What is our alternative?”

One journalist was arrested and another was on the run after a local government official filed a case against them for publishing “false information” about election irregularities, under a new law journalists say could be used to stifle dissent. Hedayet Hussain Mollah and Rashidul Islam published reports saying more votes had been cast at one constituency in the southeastern Khulna region than the total number of registered voters there. They were accused under the Digital Security Act enacted in September. Mollah was picked up by police on Tuesday afternoon while Islam was on the run, police said. “This is false information that was made intentionally to make the election result look questionable and controversial,” a police report said. The deadly clashes on voting day marked the end of a violent campaign. The opposition said its workers faced arbitrary arrests and candidates were attacked by ruling party activists. The ruling party denied being behind any violence. “People have shared experiences of being physically assaulted and manhandled at polling stations,” said Saad Hammadi, Amnesty International’s regional campaigner for South Asia, calling for an impartial probe into incidents of violence. Hasina, whose father, state founder Mujibur Rahman, was assassinated in a coup in 1975, has alternated in and out of power for nearly three decades with her main rival, BNP leader Zia Khaleda. Khaleda was jailed in February for corruption.