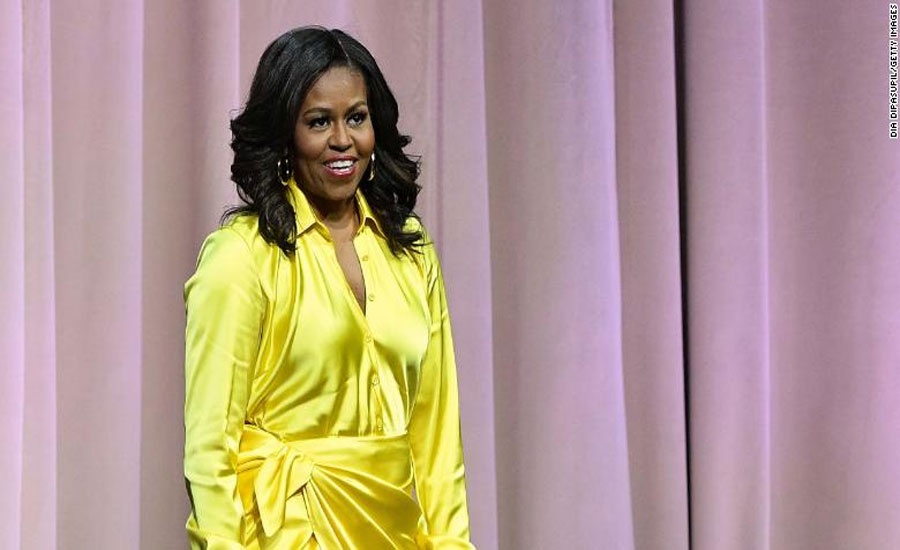 US (Web Desk) - Former first lady Michelle Obama in a tweet has made an oblique reference to President Donald Trump's racist jabs against a foursome of first-term congresswomen of color, saying that "what truly makes our country great is its diversity."

Her comment comes after Trump launched days of controversy with a racist attack against Democratic Reps. Alexandria Ocasio-Cortez of New York, Ayanna Pressley of Massachusetts, Rashida Tlaib of Michigan and Ilhan Omar of Minnesota. Trump has repeatedly denigrated the four minority congresswomen, often referred to as "The Squad," as he works to peg them as the new face of the Democratic Party.
"Whether we are born here or seek refuge here, there's a place for us all," Obama wrote on Twitter without directly referencing the President. "We must remember it's not my America or your America. It's our America."
"I've seen that beauty in so many ways over the years," she said.
Obama alluded to Trump's racist tweets just two days after the President's rally in North Carolinaerupted in chants of "Send her back!" as he assailed Omar, who was born in Somalia.
Trump waited 13 seconds before speaking as the crowd loudly chanted, though he later said he did not approve of the chant.
"I was not happy with it. I disagree with it," the President told reporters at the White House a day after the rally.
Trump tweeted racist language attacking the progressive Democratic congresswomen on Sunday, in which he told the group of lawmakers to "go back" to their home countries. Three of the group were born in America while Omar came to the US as a refugee in 2000 and became a citizen when she was 17, according to the New York Times.
Democrats across the ideological spectrum have sharply criticized Trump for his racist comments, and House Democrats projected unity in a vote Tuesday to condemn the President's racist language. The resolution passed the chamber 240-187 in a vote split largely along party lines, with just four Republicans voting to condemn the President's comments.
Former President Barack Obama's office told CNN this week that he was not planning to weigh in on Trump's racist tweet or the "Send her back!" chant that broke out Wednesday.
SOURCE: CNN INTERNATIONAL