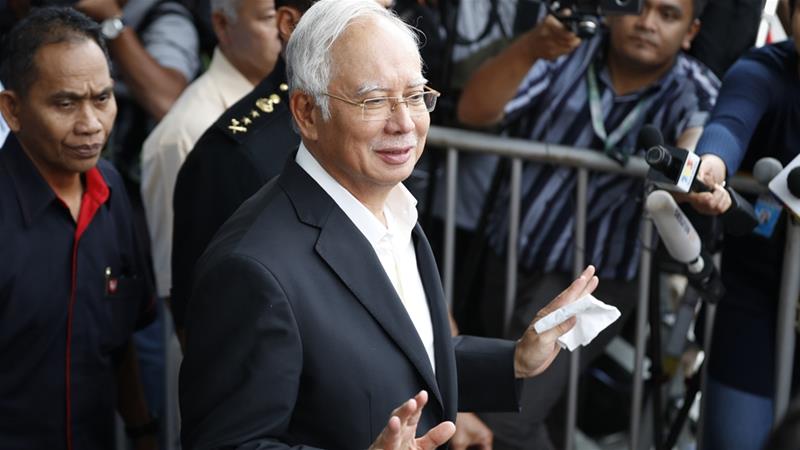 KUALA LUMPUR (Reuters) - The wife of former Malaysian prime minister Najib Razak was charged with 17 offences on Thursday, including money laundering, as anti-graft agents investigate billions of dollars missing from state coffers.
The charges against Rosmah Mansor were read out by prosecutors at a Kuala Lumpur court, after she spent a night in detention following her arrest by anti-graft investigators on Wednesday. Rosmah pleaded not guilty to all charges. Najib, who lost office in May, faces 32 charges from money laundering to abuse of power and criminal breach of trust over billions of dollars that went missing from 1Malaysia Development Berhad (1MDB). He has denied any wrongdoing. It was not clear if the charges against Rosmah relate to 1MDB, but Rosmah’s arrest came after three rounds of questioning by anti-graft agents over 1MDB, from which US authorities say over $4.5 billion was misappropriated. Last Wednesday, Rosmah was questioned for nearly 13 hours. Rosmah, who arrived in court flanked by dozens of armed police officers, smiling, waving and blowing kisses at the media, was charged with activities using illegal proceeds and failing to declare income tax, both covered under the anti-money laundering law. Prosecutor Gopal Sri Ram said these were non-bailable offences and that she had approached a witness to ask them to give a statement in her favour. “The principle therefore is they would not be granted (bail) where there is a real danger of witnesses being tampered with,” Gopal Sri Ram told the court. However, the judge granted Rosmah bail for 2 million ringgit ($482,509.05). The money laundering charges carry a penalty of up to 15 years in jail and a fine of not less than five times the value of the proceeds of any illegal transfers, or five million ringgit ($1.21 million), whichever is higher. Najib also appeared at another courtroom in Kuala Lumpur on Thursday for a pre-trial hearing, as he faces multiple charges in relation to about $10.6 million allegedly transferred into his account from SRC International, a former unit of scandal-ridden state fund 1MDB. Najib has plead not guilty. Malaysians have been outraged by the seizure of around $275 million worth of cash and goods, including a vast collection of Hermes Birkin and other designer handbags, jewellery and watches from properties linked to Najib and Rosmah. 1MDB is now the subject of money laundering probes in over six countries, including the US, Switzerland and Singapore.