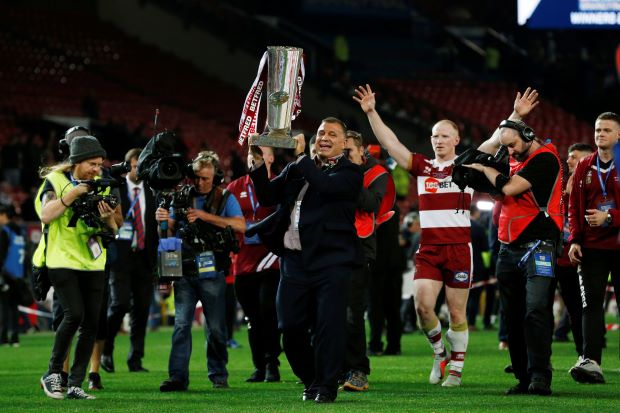 MANCHESTER (Reuters) - Wigan Warriors gave head coach Shaun Wane the perfect leaving present as they wrapped up their 22nd English title by beating Warrington Wolves 12-4 in an intense Super League Grand Final . Wane, who will now take up a high performance role with the Scottish Rugby Union, watched his side grind out a deserved victory at Old Trafford with a tenacious defensive display to cap his seven-year reign as Wigan coach. Warrington started brightly in a bid to claim their first Grand Final victory, and it was former Wigan winger Josh Charnley who scored the first try to give them a 4-0 lead after 13 minutes. However, scores from Dom Manfredi and Tom Davies before the break shifted the match in Wigan’s favour and Manfredi squeezed over in the corner with two minutes left to wrap up the win and give Wane a perfect swansong. It was a triumphant day for Wigan after a stoppage-time penalty by Charlotte Foley gave their women’s team their first Super League triumph with an 18-16 victory over Leeds Rhinos at the Manchester Regional Arena. Wigan’s women’s team, who were only established last year, stopped Leeds adding to their Challenge Cup and League Leaders’ wins thanks to tries from Rachel Thompson (3) and Georgia Wilson. Leeds were 10 points down after an hour but pulled level at 16-16 with minutes remaining, but a missed conversion by Courtney Hill proved crucial as Foley wrapped up the Wigan win.