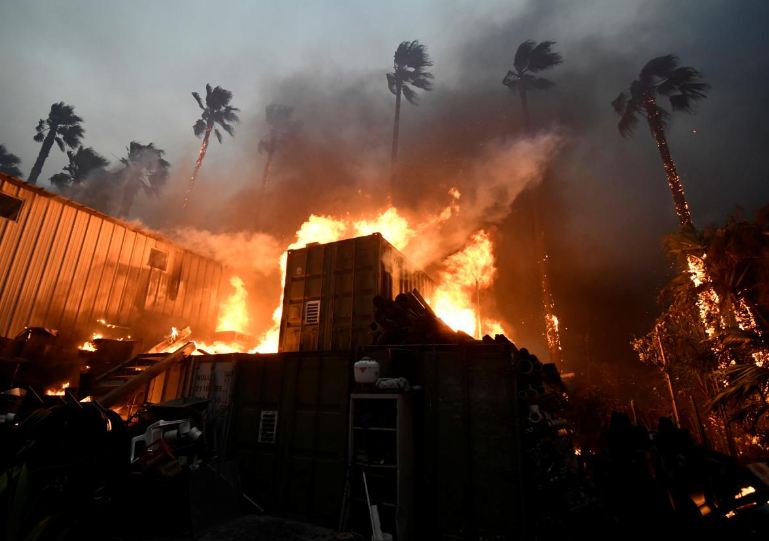 PARADISE, Calif. (Reuters) - Two monster wildfires burned out of control on Saturday in northern and southern California, having already killed at least nine people and forced hundreds of thousands to flee their homes. Nine people were found dead in and around the Northern California town of Paradise, where more than 6,700 homes and businesses were burned down by the Camp Fire, making it the most destructive blaze in California history, according to state’s department of Forestry and Fire Protection. “This event was the worst-case scenario. It was the event we have feared for a long time,” Butte County Sheriff Kory Honea said at a Friday evening press conference. “Regrettably, not everybody made it out.” About 500 miles (800 km) to the south in Los Angeles County, the 35,000-acre (14,164 hectares) Woolsey Fire was threatening 75,000 homes and more than 200,000 people were under mandatory evacuation early on Saturday. Some of the evacuation orders were for residents within the City of Los Angeles in the West Hills area. It was unclear how many homes have been evacuated within the City of Los Angeles Trump early on Saturday tweeted that “gross mismanagement of forests” was to blame for the two unchecked wildfires. “There is no reason for these massive, deadly and costly forest fires in California except that forest management is so poor,” he wrote in a Twitter post. “Billions of dollars are given each year, with so many lives lost, all because of gross mismanagement of the forests. Remedy now, or no more Fed payments!,” he added. The remains of five of the victims in Northern California were discovered in or near burned out cars, three outside residences and one inside a home, Butte County’s Honea said. Another 35 people had been reported missing and three firefighters had been injured. The flames descended on Paradise so quickly that many people were forced to abandon their cars and run for their lives down the sole road through the mountain town. The Camp Fire, which broke out on Thursday at the edge of the Plumas National Forest northeast of Sacramento, has since blackened more than 90,000 acres and was only 5 percent contained as of nightfall on Friday.

The Woolsey Fire broke out on Thursday and quickly jumped the 101 Freeway, a major north-south artery, in several places. On Friday, it moved over the Santa Monica Mountains toward Malibu, where flames driven by hot Santa Ana winds gusting up to 50 miles per hour (80 kph) raced down hillsides and through canyons toward multi-million dollar homes. Early on Saturday, fire was nearing Pepperdine University, a private residential college with 7,700 students, where students remained sheltered on the school’s main campus in Malibu. School officials told students gathered in a common area that they have been assured by fire officials that the school’s buildings were built to withstand fire. “It’s very clear that both L.A. County Fire and Pepperdine are thinking this our best course of action at this point,” said Connie Horton, vice president for student affairs, on a video posted on Twitter that showed some students wearing paper masks over their mouths. She warned students to anticipate “more smoke and maybe even ash and probably some frightening visuals, things like a tree on fire.” Thousands of residents took to the Pacific Coast Highway to head south or took refuge on beaches, along with their horses and other pets. Among those forced to flee were celebrities including Lady Gaga and Kim Kardashian, who said on Twitter that flames had damaged the home she shares in nearby Calabasas with Kanye West. “Fire is now burning out of control and heading into populated areas of Malibu,” the city said in a statement online. “All residents must evacuate immediately.” Some 95,000 residents have been evacuated in Ventura County alone, the county’s fire department said on Twitter on Friday night. The blaze also threatened parts of the nearby town of Thousand Oaks, where a gunman killed 12 people earlier this week in a shooting rampage. Elsewhere, the Hill Fire in Ventura County’s Santa Rosa Valley had charred about 6,000 acres (2,428 hectares) as of Friday evening, according to Cal Fire. In Los Angeles, another, smaller fire in Griffith Park forced the Los Angeles Zoo to evacuate a number of show birds and some small primates on Friday as flames came within less than 2 miles (3 km) of the facility, zoo officials said in a statement.