Will not budge from our clear-cut stance on Kashmir, says PM Imran Khan

Will not budge from our clear-cut stance on Kashmir, says PM Imran Khan

ISLAMABAD (92 News) – Prime Minister Imran Khan has said Pakistan will not budge from its clear-cut stance on Kashmir. In a statement, the prime minister said that Kashmir is a disputed region at the international level. “India cannot make unilateral decision. We are thankful to friendly countries for supporting Pakistan,” he said. He said that US President Donald Trump is looking into the matter minutely. Meanwhile in a tweet on Saturday, the prime minister said that that it is for the first time in over 50 years that the world’s highest diplomatic forum has taken up this Kashmir issue. “I welcome the UNSC meeting to discuss the serious situation in Occupied Jammu and Kashmir. There are 11 UNSC resolutions reiterating the Kashmiris right to self determination,” he added. 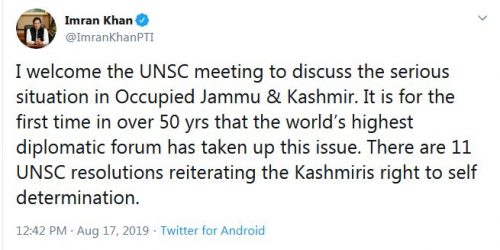 PM Imran Khan said that the UNSC meeting was a reaffirmation of these resolutions. “Therefore, addressing the suffering of the Kashmiri people and ensuring resolution of the dispute is the responsibility of this world body,” he maintained.

On Friday, Prime Minister Imran Khan and US President Donald Trump had a telephonic conversation to discuss present situation in Indian Occupied Kashmir (IOK). In a message, Foreign Minister Shah Mahmood Qureshi said that both leaders had good conversation on the issue and they are in contact with each other. “The prime minister has also contacted four permanent members, out of total five, of the UNSC and apprised them of the Kashmir situation,” he said. The foreign minister said that all countries have assured of cooperation for peace in the region.