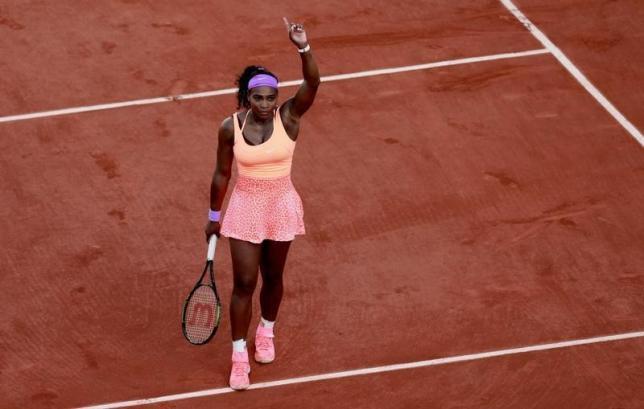 MELBOURNE - Serena Williams is on course to match Steffi Graf's major haul in the Australian Open on Saturday, but German seventh seed Angelique Kerber will be hoping she can prevent the American from emulating her idol while carving her own piece of history.

The 34-year-old world number one is a raging hot favourite to beat the first-time finalist on Rod Laver Arena, a victory that would move the American to 22 grand slam singles titles, the same as Graf and a record for the Open era.

Australia's Margaret Court holds the overall record with 24. Williams had the opportunity to join Graf last year at the US Open, victory at which would have also given her a calendar year grand slam, the first since Graf in 1988.

Italy's Roberta Vinci, however, knocked out the world number one in the semi-finals, which also ended the American's year as she took a few months off to recover from injuries and deal with the mental anguish of having missed the calendar grand slam.

That loss in New York has obviously resonated in her preparations for Melbourne Park, where she has appeared completely focussed since a testing first round clash with Italy's Camila Giorgi.

She has not dropped a set at all and conceded just 17 games since the Giorgi clash and battered the five-times grand slam champion Maria Sharapova 6-4 6-1 in the quarter-finals and fourth seed Agnieszka Radwanska 6-0 6-4 in the semi-finals.

Both Sharapova and Radwanska said afterwards they felt that Williams was playing at a level above everyone else. "I would say this is probably the best slam I've played in a year, and I've won a lot in a year," Williams told reporters on Friday. "Even if I don't win, I really can take away that I've been really consistent and I want to continue that."

Williams and Kerber have met six times, with the American winning five, though Kerber's 6-4 6-4 victory in Cincinnati in 2012 was one she would not forget. "I thought she played unbelievable in that match," Williams said. "I think from then on out I've been really focused that she's someone that I, and everyone, has to take very seriously."

Kerber, who saved a match point in her first round clash with Japan's Misaki Doi, will enter her first grand slam final with immense confidence, believing a 'nothing to lose' attitude had got her this far.

It was that attitude that helped her overturn a 2-5 second set deficit in her quarter-final against Victoria Azarenka and gave her a first win over the Belarusian in their seventh match. "'Nothing to lose' means I can go out there and try to play like I'm playing, without pressure," the 28-year-old said. "I think most will say, 'okay, Serena will win'. "But I don't have so much pressure like she has. I know I can lose the match. That's why I'm going out there to try to win it."

Kerber's confidence comes from four years of consistent play, in which she has consolidated a top-10 ranking, won seven tournaments and made the WTA Finals three times.

She will be ranked a career-best fourth by the end of the tournament, and could be two if she becomes the first German to clinch a major since Graf won the last of her slams at Roland Garros in 1999. "I think I grow in the last few years to be a top-10 player," she said. "Now I'm back in the top five. I think I showed everybody that I deserve it. That's a good feeling." -Reuters