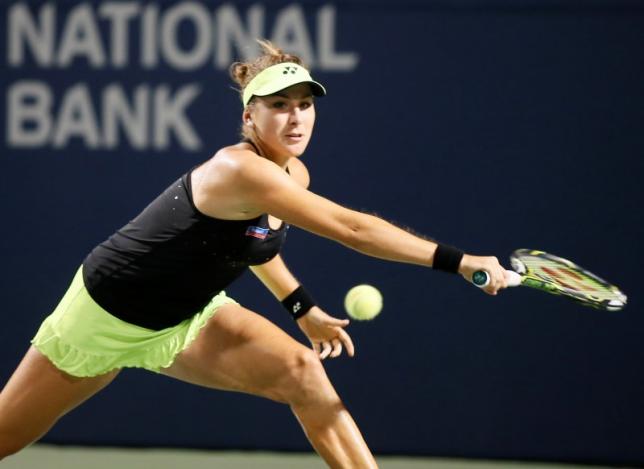 TORONTO - World number one Serena Williams rolled into the semi-finals of the Rogers Cup with a clinical 6-4 6-3 win over Italy's Roberta Vinci, setting up an intriguing showdown with Swiss teenager Belinda Bencic. Williams, a three-time champion on the Canadian hardcourts, stretched her winning streak in Toronto to 14 matches but on a humid evening she was made to sweat for her spot in the last four by her 53rd ranked opponent. Playing her first event since winning Wimbledon, Williams will next meet 18-year-old Bencic, who took apart fifth seed Anna Ivanovic 6-4 6-2. "I don't feel like I'm at my best or anywhere near it," said Williams, who will go for the Grand Slam at the U.S. Open. "But I feel like I'm going in the right direction and I want to keep that up. "I definitely feel more positive today. I don't want to peak too soon." An animated Williams struggled to get control of the first set but capitalized on her fourth break point with the Italian serving at 4-5 to claim it. In the second she got the decisive break to go up 5-3 before serving out the match. "I think she just served really well, some big serves," said Williams, who also blasted 12 aces past the Italian. "She was number one in doubles for a really long time so she obviously has a great game." Standing in the way of Williams' return to the final is Bencic, who has eliminated two former-world number ones, Caroline Wozniacki and former Rogers Cup champion Ivanovic. The Serb beat the Swiss teenager's mentor, Martina Hingis, in the 2006 final. "She (Hingis) knows her (Williams) well, I think tomorrow I can go onto the court with a plan and just keep playing as I did today," said Bencic. In other quarter-final action, second seeded Romanian Simona Halep sleepwalked through the first set before producing a remarkable comeback to record a 0-6 6-3 6-1 win over defending champion Agnieszka Radwanska. After dropping the first seven games to Radwanska, Halep started to find her rhythm and at 3-3 in the second set shifted into high gear. Looking like a completely different player she stormed through the next eight games to level the match and pulled ahead 5-0 in the third before Radwanska could stop the slide, if only for one game, before the sixth seed was sent packing. "At the beginning I could not move my legs. I felt very tired," said Halep. "I just kept focused on what I had to do and just tried to keep the ball in the court to make some longer rallies." Halep, a winner at Indian Wells earlier this season, will take on Italy's Sara Errani for a place in the final after the 15th seed advanced with a 6-4 6-4 win over Ukrainian qualifier Lesia Tsurenko. -Reuters