ABU DHABI (92 News) - An extraordinary 212-run partnership between Kane Williamson and Henry Nicholls saw New Zealand take a 198-run lead on day four of the third Test against Pakistan, leaving the match and series poised for a pulsating final day.
Pakistan began the day brightly, with the first significant moment of the opening session being the departure of nightwatchman William Somerville, trapped in front on his stumps by a sliding delivery from Yasir Shah. With that dismissal, the Pakistani leg-spinner made history, becoming the fastest bowler to 200 Test wickets, breaking an 82-year old record held by Australian Clarrie Grimmett. Ross Taylor joined Williamson at the crease and decided that attack would serve as the best form of defence for his side. He toyed with young Shaheen Afridi, depositing the left-arm quick for three fours in one over, driving him through the off-side twice, before a delicate late-cut behind square showcased some typical Taylor flair. The Pakistan debutant wasn’t to be fazed by the Kiwi veteran however, and had the last laugh in his next over, getting a short ball to rush onto Taylor who couldn’t help but look to hook it over the leg-side. He wasn’t to find much control on the shot however, with Bilal Asif taking a good catch at deep square-leg, leaving Taylor to depart for a quick-fire 22 from 14 balls. With New Zealand at 60/4, still trailing by 14 runs, Pakistan looked ready to cut through the visitors. Nevertheless, with Williamson at the crease they still faced a difficult barrier to break. Having scored 89 in the first innings, the New Zealand captain seemed intent on building on that effort and found excellent support from Nicholls. The pair combined to get New Zealand to lunch on 112/4, with Williamson passing fifty for the second time in the match, and Nicholls surviving two reviews. 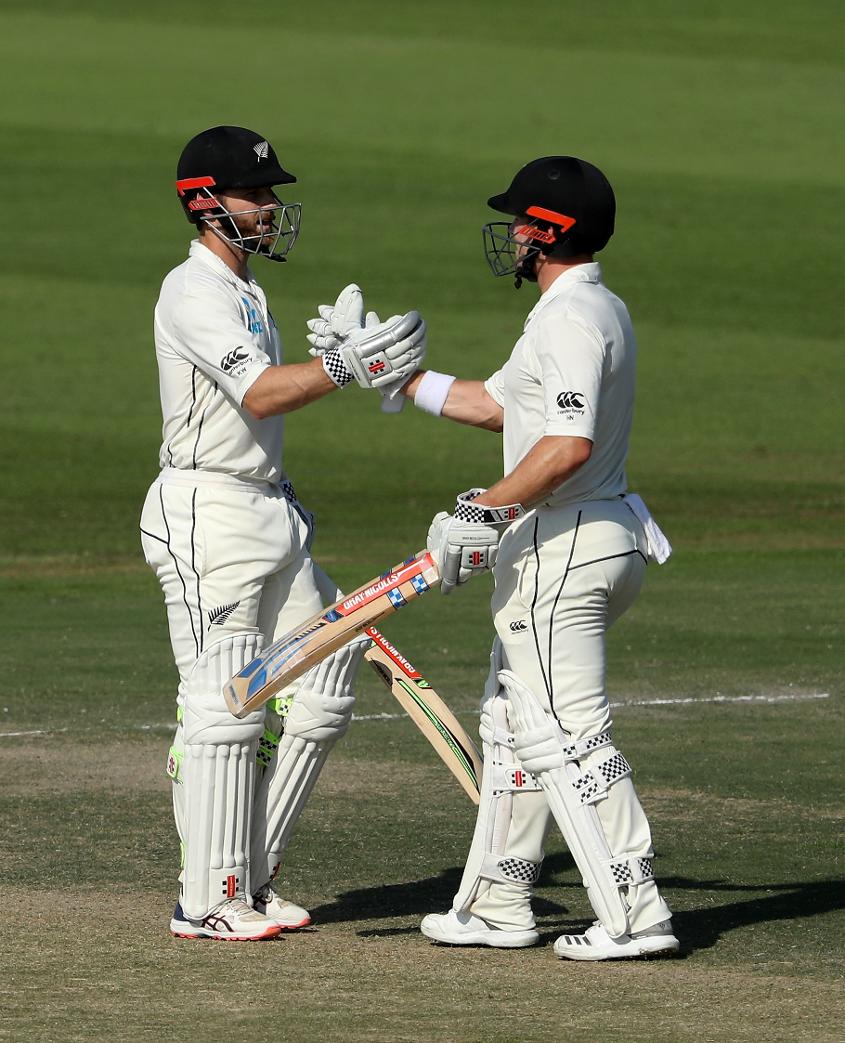 Yasir and Bilal both toiled hard after the break, but Nicholls came into his own once again in the series. The left-hander reached his half-century with a pushed single down the ground off of Yasir and Williamson reached his ton not long after, punching a good length delivery from Hasan Ali through the covers to make amends for falling short in the first-innings. Reaching personal milestones wasn’t to be enough for the pair, as they continued to run Pakistan ragged in the field. At tea, New Zealand were 199/4, and little changed in the third session as they closed the day on 272/4. Yasir's record day was blighted by the fact that he dropped New Zealand's captain twice. The prospect of a potential New Zealand victory seemed alien a day ago, but a rallying fight-back with the ball yesterday led by the debutant Somerville, followed by the masterclass of Williamson and Nicholls means that they may still be able to pull off an incredible series win in the UAE. While Williamson is unbeaten on 139, Nicholls is ten runs away from a well-deserved hundred. With a lead of 198 heading into day five, they will look to take inspiration from the first Test, which saw them defend a target of 176. For Pakistan, much of the evening will be spent rueing the collapse of day three. They will have to show some more resilience when they eventually come out to bat tomorrow to halt the prospect of a New Zealand upset.