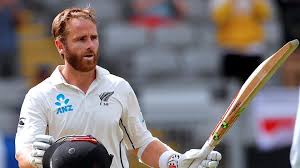 AUCKLAND (Reuters) - Kane Williamson moved into sole possession of the New Zealand test century record on a rain-disrupted second day of the series opener between a dominant New Zealand and England on Friday.

Williamson, who had resumed on 91, stroked his way to an 18th test century before the teams were driven off the field for the first time on a day when a little more than 90 minutes of play was completed.

Despite being in a fantastic position, the hosts would have undoubtedly been both bitterly disappointed and frustrated at not being able to force the game on further.

They had already taken a strong hold of the first day-night test in New Zealand in the opening 90 minutes of the match when Trent Boult and Tim Southee produced a swing bowling onslaught to dismiss the visitors for a measly 58 runs.

Williamson then dominated New Zealand’s reply, showcasing all of the talents that have driven him into the record books at a faster rate than former captain Martin Crowe and current team mate Ross Taylor, who are locked on 17 centuries.

After his team resumed on 175-3, he opened his account with minimal effort when he drove Stuart Broad straight down the ground to the long-on boundary to move to 95.

He took his time to reel off the next four runs before he brought up the milestone with a characteristic late dab through gully for a single.

While he raised his bat and took off his helmet to acknowledge applause from the Eden Park crowd, there was typically little in the way of exuberant chest beating.

Rain then forced them from the field for the first time about three minutes later.

The 27-year-old, however, was unable to kick on, with England taking the second new ball shortly after they returned and Jimmy Anderson trapped him in front for 102.

Nicholls and Watling then continued to build a huge advantage as they sought to capitalise on the home side’s superb bowling display from the first day.

Rain, however, forced them off after about an hour’s play in the middle session and while the umpires had expected to resume under lights at 7pm, another downpour arrived just as the players were emerging from the changing rooms.

Two further pitch inspections were taken by umpires Paul Reiffel and Bruce Oxenford, who decided the outfield conditions were too wet to resume. Rain is forecast for each of the remaining three days. The second test, a standard daytime match, is at Hagley Oval in Christchurch from March 30-April 3.