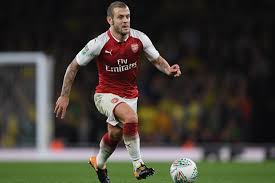 (Reuters) - Jack Wilshere hopes his move to West Ham United from Arsenal will rekindle his international career.
The 26-year-old ended his 17-year stay at Arsenal last month after injuries and poor form saw him slip down the pecking order in recent seasons. He failed to make England’s squad for the World Cup and won his last cap in 2016. “That’s a big reason why I stayed in the Premier League. I’ve always said before, I love playing for my country, I’m proud to do it and it’s been a while since I’ve done it,” Wilshere was quoted as saying by Sky Sports. Wilshere could make his West Ham debut when they face Preston North End in the third of their seven pre-season fixtures on Saturday.