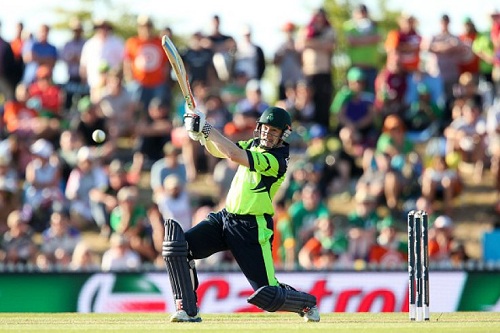 BRISBANE (Reuters) - Gary Wilson and Kevin O'Brien struck brisk half-centuries as Ireland held their nerve to clinch a thrilling two-wicket victory in their World Cup Pool B match against United Arab Emirates in Brisbane on Wednesday. Wilson hit 80 off 69 balls while all-rounder O'Brien smashed 50 off 25 to help Ireland overwhelm UAE's total of 278-9 with four balls to spare for their second consecutive win of the tournament. Needing almost 10 runs an over at one stage, Wilson and O'Brien smashed 72 in their sixth-wicket stand off just six overs to revive their chase. O'Brien, who was dropped on 24, hit eight fours and lofted Amjad Javed (3-60) for two consecutive sixes but fell on the next ball with his team still needing 36 runs to win. Wicketkeeper-batsman Wilson got Ireland, who beat West Indies in their first match, closer but was dismissed by Mohammad Naveed (2-65) after hitting the bowler for two successive boundaries ion the 48th over. Ireland needed 12 at that stage and tailenders George Dockrell and Alex Cusack held firm to see them through. Earlier, Shaiman Anwar registered UAE's first World Cup century to help them overcome a poor start and post a strong total. The 35-year-old right-hander scored 106 off 83 balls and dominated a breezy 107-run stand with Javed (42), a World Cup record for the seventh wicket, to lift UAE who were reeling at 78-4 in the 21st over. Anwar became the second batsman to score a ODI hundred for the Emirati nation, who are making their second appearance at the event after also qualifying in 1996. Anwar, who hit 10 fours and a six, raised his bat and went down on his knees after reaching the 100-run mark in 79 deliveries. Ireland were guilty of bowling too short to Anwar, who had scored his previous highest of 67 in the last match against Zimbabwe, and Javed as UAE plundered 147 runs in the last 15 overs. The duo came together with Ireland looking to bundle their opponents out having reduced them to 131 for six in the 35th over. Anwar eventually fell in the 49th over, skying Max Sorensen for Wilson to complete a comfortable catch. Off-spinner Paul Stirling (2-27) struck in his second over to dismiss Andri Berenger (13) and then picked up Krishna Chandran for a duck in his third to deny UAE a strong start after they were put in to bat first. O'Brien came into the attack for Ireland and dismissed set opener Amjad Ali (45) and Swapnil Patil (two) in his first two overs to further stifle the UAE innings.