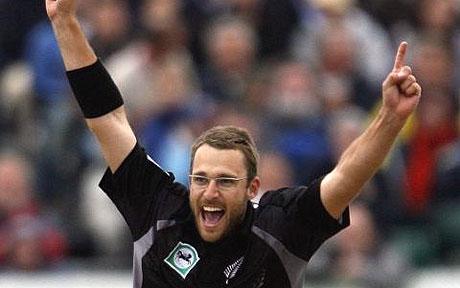 NAPIER (Reuters) - The influence of Daniel Vettori on New Zealand's World Cup chances was never more evident than in his bowling in a tense trans-Tasman clash with Australia at a heaving Eden Park last Saturday. Australia's top order were threatening to bat New Zealand out of the match before the first 10 overs were bowled. On a hunch, McCullum turned to left-arm spinner Vettori in the seventh over with Michael Clarke's side 51 for one. The 36-year-old abruptly put the brakes on the Australians and took two wickets before Trent Boult returned with a devastating five-over spell that netted five wickets, three maidens and only three runs. Australia were dismissed for 151. "Dan came and did his own thing and really tied it up," Boult said after the nervous one-wicket win. "He has been doing it for years now. "He's a massive part of our team and is a pleasure to watch when he does things like that. It allows us to hang off then come back and strike at the right time." Vettori's ability to tie up an end will be crucial to his side's chances on the small New Zealand grounds. A stress fracture in his back more than a decade ago has nullified any torque he once had in his delivery stride and he is no longer a big turner of the ball. But it is his ability to change flight, pace and trajectory with different arm angles that keeps the best batsmen in the world guessing and often content to push for whatever singles they can before attacking at the other end. That kind of accuracy and parsimony creates scoreboard pressure, making him a key component in McCullum's side and a player opposing teams are wary of. HARRY POTTER Such is his influence, England's travelling 'Barmy Army' fans dedicated one of their songs to Vettori, labelling him 'Harry Potter in disguise'. The bespectacled Vettori once bore a resemblance to the eponymous boy wizard played by actor Daniel Radcliffe in the eight films based on JK Rowling's books. Vettori abandoned a potential career as a pharmacist shortly after he became the youngest man to represent New Zealand at test cricket in 1997. As a child prodigy with glasses, capable of casting spells over batsmen -- and with more than a passing interest in potions -- little wonder the Barmy Army made the connection. A frustrated medium pace bowler at high school, Vettori switched to spin at the age of 15 and made his test debut just three years later. A newspaper headline screamed: "BUT HE'S ONLY 18". He has since set a swag of records in New Zealand cricket. He has played the most test matches (113), most ODIs (290) and taken the most ODI wickets (298). Across all teams, he is the most prolific number eight batsman in tests, having scored 2227 runs with four centuries at an average of just under 40 there. Achilles tendon and back injuries in recent years ended his hopes to surpass Richard Hadlee (431) as New Zealand's highest test wicket taker. However, he proved in the last six months he could stand up to the rigours of international cricket and was even called into the test side against Pakistan in UAE late last year. Now playing in his fourth World Cup after two trips to the semi-finals, Vettori is hoping there is one more record he can help his team to -- their first world title.