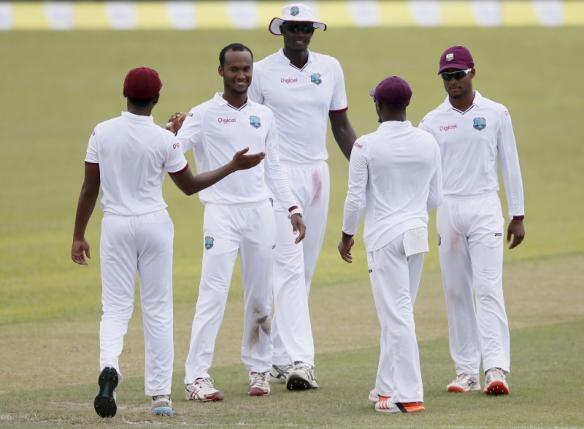 ANTIGUA – India's Test ranking has long been based on their formidable home form but the side aim to impress new coach Anil Kumble by showing they can adapt to conditions outside the subcontinent in a four-test against West Indies starting in Antigua on Thursday. For the hosts, however, the task is more straightforward -- simply proving they can still be competitive in the long form of the game. Since last touring West Indies in 2011, when they ground out a 1-0 Test series victory (with two draws), India have lost six consecutive series outside of Asia – two each in England and Australia and one each in South Africa and New Zealand. Their record in that time is one win, 15 defeats and five draws. That does not include a 2-1 series victory in nearby Sri Lanka last year, where conditions are typically similar to those encountered at home. Former leg-spinner Kumble was recently appointed head coach of the Indians, who are second behind Australia in the Test rankings, after pitching a plan to fix that miserable away record. And while he has already moved to tighten discipline, introducing a fine of $50 for being late, he shies away from being branded a strict disciplinarian. “All I know I am a cricket coach and whether I am strict or lenient, you will probably have to ask the team,” he said recently. Kumble could hardly ask for a better chance to start the job on a winning note than against a West Indies team weakened by administrative conflict and the unavailability of several key players, with fast bowler Jerome Taylor the latest to retire from the Test format. While West Indies excel in the Twenty20 format, they are eighth of nine nations in the Test rankings, ahead only of minnows Bangladesh. Kumble has stressed his team must demonstrate patience throughout the series, a sentiment shared by West Indies all-rounder Carlos Brathwaite. "We expect to face a lot of spin against the Indians in this series, so it is about playing the waiting game," said Brathwaite, who blasted four sixes in a row against England to seal West Indies' World Twenty20 triumph in April. "We need to look to spend long periods at the crease so we are preaching that in the dressing room." After the first Test in Antigua, the remaining Tests will be played in Jamaica (July 30- Aug. 3), St Lucia (Aug. 9-13) and Trinidad (Aug. 18-22). SQUADS: West Indies: Jason Holder (captain), Kraigg Brathwaite, Devendra Bishoo, Jermaine Blackwood, Carlos Brathwaite, Darren Bravo, Rajendra Chandrika, Roston Chase, Miguel Cummins, Shane Dowrich, Shannon Gabriel, Leon Johnson, Marlon Samuels India: Virat Kohli (captain), Ajinkya Rahane, Ravichandran Ashwin, Stuart Binny, Shikhar Dhawan, Ravindra Jadeja, Bhuvneshwar Kumar, Amit Mishra, Mohammed Shami, Cheteshwar Pujara, Lokesh Rahul, Wriddhiman Saha, Rohit Sharma, Shardul Thakur, Murali Vijay, Umesh Yadav, Ishant Sharma. –Reuters