Windies make it 2-0 after Super Over thriller against Pakistan 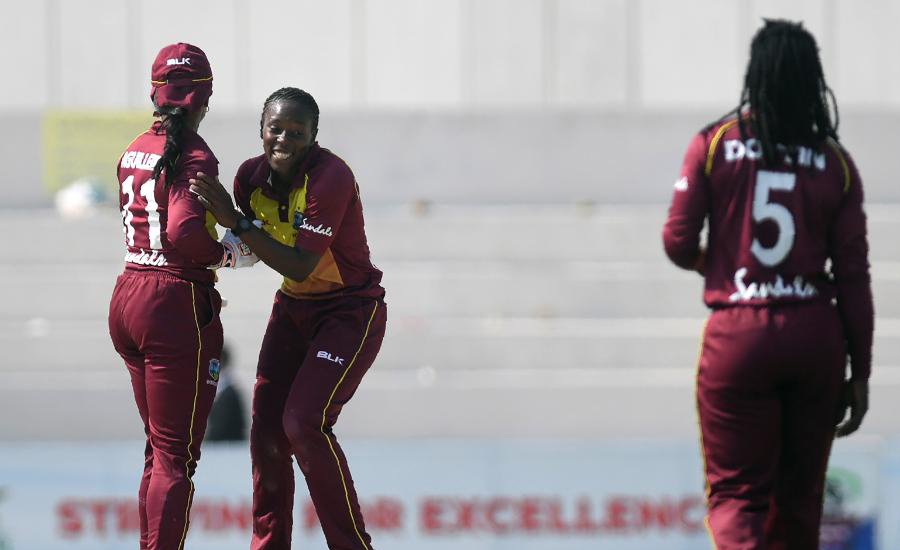 Windies make it 2-0 after Super Over thriller against Pakistan

KARACHI (92 News) – The Windies made it 2-0 in the three-match Twenty20 International series in Pakistan, but they had to do it the hard way, with Pakistan pushing the game into the Super Over on Friday in Karachi. Deandra Dotting and Shakera Selman were the stars of the show. Dottin first hammered two sixes and a four off Sana Mir in the Super Over, setting Pakistan 19 to win. It was a daunting target, and Selman reaped the rewards of Pakistan’s urgency, scalping both Aliya Riaz and Nida Dar. It was, in every sense, a thriller. Pakistan had opted to bat, and had set the Windies a fairly tricky target of 133, with Javeria Khan and Bismah Maroof doing well to revive the innings after the early loss of Umaima Sohail for nought. Khan and Maroof put on a fine 59 for the second wicket, with both batters running between wickets every chance they got. Unfortunately for Pakistan, they couldn’t kick on. Maroof was stumped off the leg-spin of Afy Fletcher for a 34-ball 31 and in the very next over, Khan was seen off by Dottin for a 28-ball 26. Suddenly, Pakistan were 63/3 in 12 overs. But Dar and Iram Javed revived the innings once again. They put on a 27-run stand before the latter was snared by Dottin for a 17-ball 18. Then, when Riyaz walked in, the scoring-rate shot up. She scored a 13-ball 23, and Dar contributed with a 24-ball 25. They quickly added 42 in just over four overs, with Dar even launching a six en route. It was a tricky total, all considered. And so it proved. The Windies had strong contributions from the top order, but a middle-order wobble nearly cost them the game. Dottin and Kycia Knight put on a quick 30 for the opening wicket before Anam Amin had Dottin dismissed for a 24-ball 22. Knight carried on, with Shemaine Campbelle for company. Their 54-run stand, however, was slow progress, coming as it did in nine overs. That heaped the pressure on the middle order once the stand was broken – Knight was run-out for a 30-ball 32 – and suddenly, the Windies encountered a slide. Chedean Nation (13) was trapped in front, and became Amin’s second victim, Natasha McLean was stumped off Mir for 1, and Campbelle’s long innings ended when Aiman Anwer sent her back for a 44-ball 41. The Windies were 117/5, but Chinelle Henry scored an unbeaten 5-ball 11 to help tie the scores, despite the late fall of captain Merissa Aguilleira for a 7-ball 6. It proved just about enough. –ICC