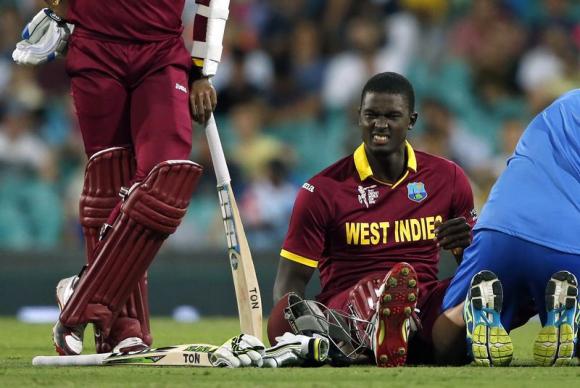 HAMILTON - West Indies captain Jason Holder already had one of the toughest jobs at the World Cup but this week faces the hardest assignment for any sportsman -- waiting to see if other results will send his team into the quarter-finals. The 23-year-old fast bowling all-rounder was a shock selection as captain for the tournament, if anything in the chaos that has been West Indies cricket for the last few years can still be described as a surprise. Despite his efforts, the twice former champions have been consistent only in their inconsistency in their first five Pool B matches. A meek defeat to Ireland in their opener was followed by a thrashing of Pakistan and then a victory over Zimbabwe on the back of Chris Gayle's double century. The momentum from those victories was lost, however, in a 257-run humbling at the hands of South Africa and a four-wicket defeat to India in Perth last Friday. The loss to India would have been worse had Holder, batting at number nine, not scored a career best 57 runs to give the team some sort of total to defend. Holder came under some criticism for his management of the bowlers, however, as West Indies let the world champions off the hook after reducing them to 107 for five in the 23rd over. The result means West Indies are now reliant on Ireland losing both their final pool matches to reach the knockout stage, even if they beat United Arab Emirates in Napier next Sunday. "I can only control what I can control," Holder said at the WACA. "Whatever happens in those last preliminary games is beyond my control. "We've got to sit and wait and see how the table looks before our last game, and then we come up with a plan and a strategy how we go forward. "What I can control is the game against UAE, and I can assure you that we are going to win that game by all means, and we just need to be aggressive and finish this preliminary round in a good manner." GOOD RELATIONSHIPS A player with just 26 one-day international matches under his belt coming into the tournament would normally have been allowed to concentrate on his own game in his maiden World Cup. Instead, Holder has been tasked with galvanising cricketers up to 12 years his senior with reputations that far exceed his own in a playing group that has a reputation for divisions and discontent. He has received some help from West Indies fast bowling great Curtly Ambrose, the squad's bowling coach, but the buck ultimately stops with Holder. "I have a very good relationship with most players," Holder said. "It may not require me to be speaking to them in a team setting. I may just pull them one-on-one and just have a chat. "We just sort of unlace things, try to work out stuff. Obviously we didn't bat well in (Perth) so we just need to address a few areas. "But there are ways that I will go about doing it, but we just need to be honest with ourselves and we just didn't bat well enough in these last two games, and the batsmen just need to be accountable for putting runs on the board." – Reuters