Wing part found in Tanzania is "highly likely" from MH370 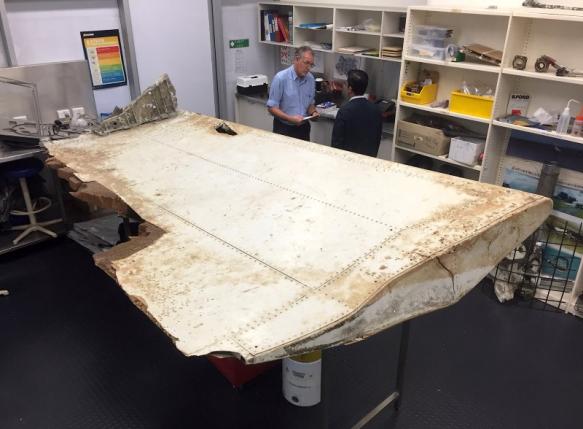 Wing part found in Tanzania is "highly likely" from MH370

SYDNEY - An aircraft wing part found in Tanzania is "highly likely" to be part of missing Malaysia Airlines flight MH370, an Australian government minister said on Friday, in what would be the second confirmed piece of the jetliner. Flight MH370 disappeared in March 2014 with 239 passengers and crew on board shortly after taking off from Kuala Lumpur bound for Beijing. Investigators believe someone may have deliberately switched off the plane's transponder before diverting it thousands of miles off course over the Indian Ocean. The wing part found in Tanzania is being examined in Australia. "It is highly likely that the latest piece of debris being analysed is from missing Malaysia Airlines flight MH370," Minister for Infrastructure and Transport Darren Chester said in a statement. "The experts will continue to analyse this piece to assess what information can be determined from it." Investigators have confirmed a piece of plane debris found on the French island of Reunion in July 2015 as being part of MH370. They have said several other pieces of debris found in Mozambique, South Africa and Rodrigues Island, a territory of Mauritius, are likely to be parts of the missing plane. A search for the Boeing 777 has been going on in the Indian Ocean for more than two years but no sign of the main wreckage has been found. Malaysia, China and Australia said last week the hunt would be suspended if the aircraft was not found in an area now being searched. -Reuters