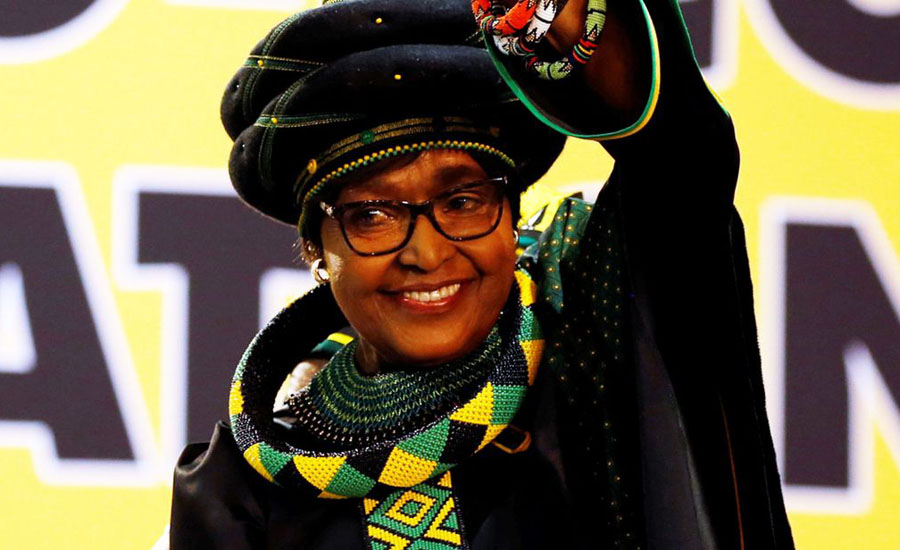 SOWETO (Reuters) - Winnie Madikizela-Mandela, who emerged as a combative anti-apartheid campaigner during her husband Nelson Mandela’s decades in jail but whose reputation was later tarnished by allegations of violence, died on Monday at the age of 81. Madikizela-Mandela died peacefully surrounded by her family following a long illness that kept her in and out of hospital since the start of the year, family spokesman Victor Dlamini said in a statement. “Winnie Mandela leaves a huge legacy and, as we say in African culture, a gigantic tree has fallen,” President Cyril Ramaphosa said after visiting Madikizela-Mandela’s house in Soweto, where he was surrounded by singing mourners. “She has been one of the strongest women in our struggle, who suffered immensely under the apartheid regime, who was imprisoned, who was banished, who was treated very badly,” he said. An official memorial service will be held for Madikizela-Mandela on April 11 and a national funeral on April 14, said Ramaphosa, who declared earlier that South Africans had lost “a mother, a grandmother, a friend, a comrade, a leader and an icon.” A crowd of around 200 people congregated outside Madikizela-Mandela’s Soweto home soon after her death was announced, singing and dancing. The cause of death or nature of her illness was not disclosed Ministers and national figures paid tribute, including retired South African cleric and anti-apartheid campaigner Archbishop Desmond Tutu, who said: “Her courageous defiance was deeply inspirational to me, and to generations of activists.” United Nations Secretary-General Antonio Guterres was among those who offered his condolences from abroad, according to UN spokesman Stephane Dujarric. “The secretary-general is saddened by the passing of Ms. Winnie Madikizela Mandela, a leading figure at the forefront of the fight against apartheid in South Africa. She was a strong and fearless voice in the struggle for equal rights and will be remembered as a symbol of resistance,” he said. TIRELESS CAMPAIGNER Born on Sept. 26, 1936, in Bizana, Eastern Cape province, Madikizela-Mandela became politicised at an early age in her job as a hospital social worker. The 22-year-old Winnie caught the eye of Mandela at a Soweto bus-stop in 1957, starting a whirlwind romance that led to their marriage a year later. After Nelson Mandela was jailed for life in 1964 for sabotage and plotting to overthrow the government, Madikizela-Mandela campaigned tirelessly for his release and emerged as a prominent anti-apartheid figure in her own right, undergoing detention, banishment and arrest. She punched the air in the clenched-fist salute of black power as she walked hand-in-hand with Mandela out of Victor Verster prison, near Cape Town, on Feb. 11, 1990. For husband and wife, it was a crowning moment that led four years later to the end of centuries of white domination when Mandela became South Africa’s first black president. But their marriage began to fall apart in the years after his release. The couple divorced in 1996, nearly four decades after they were married. They had two children together. The end of apartheid marked the start of a string of legal and political troubles for Madikizela-Mandela. As evidence emerged in the dying years of apartheid of the brutality of her Soweto enforcers, the “Mandela United Football Club”, her soubriquet switched from “Mother” of the nation to “Mugger”. Blamed for the killing of activist Stompie Seipei, who was found near her Soweto home with his throat cut, she was convicted in 1991 of kidnapping and assaulting the 14-year-old because he was suspected of being an informer. Her six-year jail term was reduced on appeal to a fine.