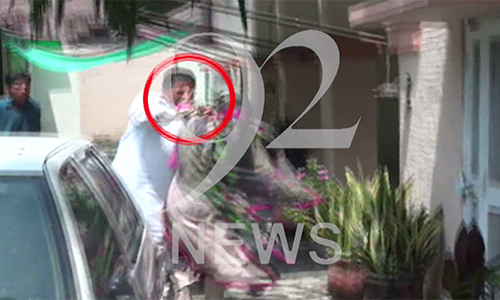 GUJRANWALA (92 News) – A woman thrashed a deputy superintendent of police (DSP) in Anti-Corruption Establishment Office for deceiving her in the name of marriage on Wednesday. DSP Azam Mehr had promised to contract the marriage with Rahat Naz, a junior clerk at Gujranwala Board of Intermediate and Secondary Education, but he did not fulfill the promise. At this, Rahat Naz submitted an application to the IGP Punjab against the DSP. Later, the DSP agreed to contract the marriage. About 10 days before the marriage, the DSP sent Rs 50,000 to her for shopping and later got her arrested by the ACE officials on the charge of bribe. The ACE authorities had summoned both the parties. After the inquiry, the woman attacked him with slaps and shoes. DSP Azam Mehr continued to hide himself from the woman’s wrath in different rooms of the office. However, the woman chased him while waving the shoe. Later, the ACE officials calmed her down.