Women may get misleading results from treadmill stress tests 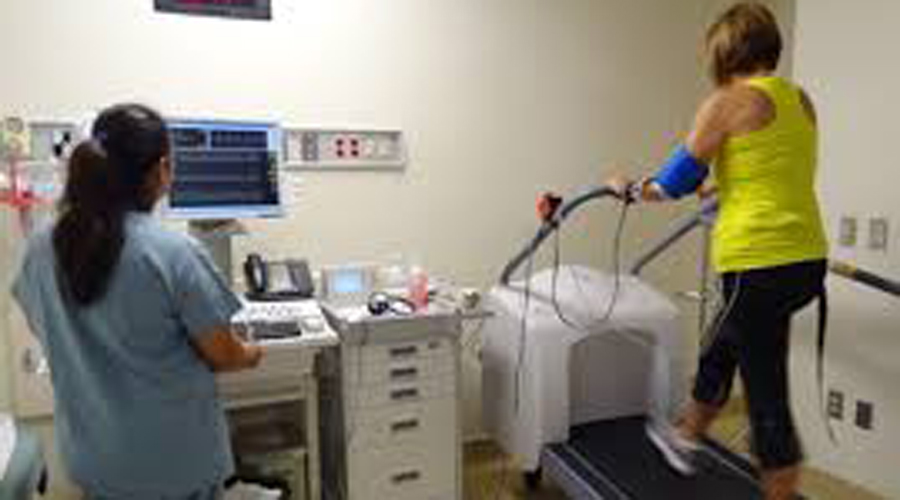 Women may get misleading results from treadmill stress tests

NEW YORK – Traditional treadmill tests used to estimate heart disease risk might not provide accurate results for women, a recent study suggests. These assessments have been used for decades to determine patients’ risk of dying from cardiovascular disease. But the results can be inaccurate because the scoring system was developed based on experiments done only in middle-aged men, said senior study author Dr. Leslie Cho, director of the Women’s Cardiovascular Center at the Cleveland Clinic in Ohio. “There has been no good data to support its use in women,” Cho said by email. “The score was likely underestimating risk for some women, while overestimating it for others, based on their age.” At the same time, scores from the most commonly used version, known as the Duke Treadmill Test, focus primarily on exercise ability and don’t account for health problems like diabetes or high blood pressure that can influence the risk of developing cardiovascular disease, Cho noted. For the current study, Cho and colleagues examined results from a new assessment designed to better estimate the risk of death from heart disease in both men and women. Researchers analyzed data on more than 100,000 adults seen at Cleveland Clinic from 2000 through 2010 or the Henry Ford Health System from 1991 through 2009. All of the study participants had exercise tests. Researchers could also see medical records to determine other risk factors for heart disease such as high blood pressure, diabetes, obesity or elevated cholesterol levels. Among the subset of almost 60,000 people seen at Cleveland Clinic, half of the patients were at least 54 years old. They ranged in age from 45 to 63, and half of them were followed for at least seven years. Roughly 60 percent of participants were men. The men generally had higher exercise capacity and higher odds of a history of coronary artery disease than the women, researchers report in JAMA Cardiology. In this group, 1,779 men, or 5 percent, died during the study period, compared with 742 women, or 3.1 percent. For both sexes, death was associated with older age, lower body weight, diabetes, high blood pressure, elevated cholesterol levels, a current or previous smoking habit, and history of health issues like heart attack, artery disease, stroke, heart failure, kidney disease and chronic obstructive pulmonary disorder. When researchers developed sex-specific risk scores, however, they found a history of diabetes was associated with mortality in women, while a history of heart failure and hypertension were associated with mortality in men. Researchers tested the accuracy of their sex-specific risk scores by applying these ratings to a separate group of more than 49,000 patients seen at Henry Ford. While exercise capacity was still the biggest predictor of risk, accounting for these other patient characteristics offered a more accurate picture of individual risk in men and women, the authors conclude. One limitation of the analysis is that researchers focused on deaths from all causes rather than mortality tied only to cardiovascular disease, the authors note. They also lacked access to imaging data that might help verify, for example, the extent of artery disease. Even so, the testing criteria proposed in the study may more accurately reflect women’s risk of dying from heart disease because the traditional scores generally didn’t account for the fact that men tend to have better exercise capacity than women, noted Dr. Armin Zadeh, a researcher at Johns Hopkins University in Baltimore who wasn’t involved in the study. “It's not so much that their risk factors are different but that an important component of the exercise treadmill testing is the exercise capacity which tends to be greater in men than women,” Zadeh added by email. “Therefore, the old criteria set an unfairly high bar for women to clear for the same prognostic value.” Looking at women separately can offer a more accurate picture of how well women perform on exercise tests based on what would be considered a good or bad performance for their female peers, Zadeh noted. “When not separating scores, women will be held to a higher standard, which will bias results,” Zadeh said. –Reuters