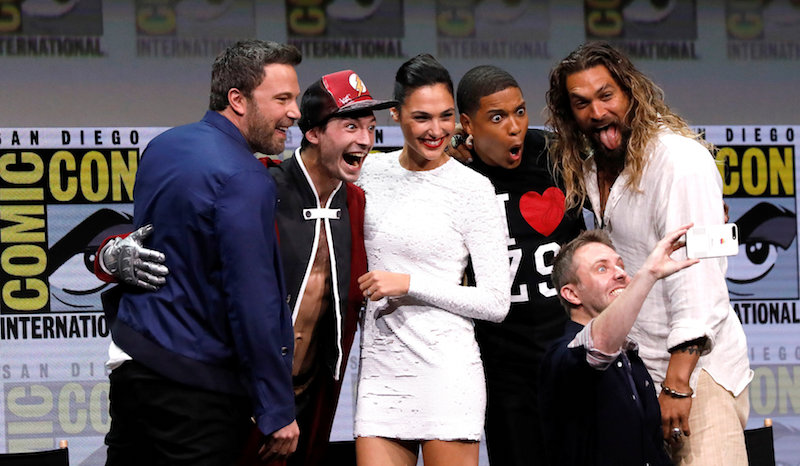 SAN DIEGO - After smashing box office records this year, Wonder Woman received the loudest cheers among the DC superheroes gathered at San Diego's annual Comic-Con to present new footage and trailers for Warner Bros' expanding comic book film franchise. A teaser of Warner Bros' upcoming superhero films shown to the 6,500 attendees at the panel gave a glimpse of "Wonder Woman II," a presumed sequel to June's "Wonder Woman" movie that is on track this weekend to become the second-highest grossing movie of 2017. No further details were revealed about "Wonder Woman II," but star Gal Gadot joined Ben Affleck (Batman), Ezra Miller (Flash), Ray Fisher (Cyborg) and Jason Momoa (Aquaman), to present the latest trailer for November's "Justice League" movie, which will unite the DC superheroes. Affleck said he was "the luckiest guy in the world" and "so thrilled" to play the caped crusader, dispelling trade publication The Hollywood Reporter's report this week that his future as Batman was uncertain. The latest trailer picks up after the death of Superman from last year's "Batman v Superman: Dawn of Justice," and shows Batman and Wonder Woman joined by the Flash, Cyborg and Aquaman to fight supervillain Steppenwolf. Wonder Woman says "They said age of heroes would never come again," as Batman tells her, "it has to." "All of these characters are dealing with personal issues and they come together and are able to use those circumstances to save the world, which is beautiful," Fisher said. In his excitement after watching the new trailer, the muscle-bound Momoa threw his chair across the stage, breaking it and briefly sitting on the floor. Momoa also debuted the first look at the standalone "Aquaman" movie, and revealed the aquatic superhero will be battling his brother, the supervillain Ocean Master, in the film due out next year. The avid fan base at Comic-Con, a gathering of pop and nerd culture fans, were also shown footage of Warner Bros' upcoming sci-fi films "Ready Player One" and "Blade Runner 2049." Veteran filmmaker Steven Spielberg is directing "Ready Player One," out next year and adapted from the book of the same name, about a near-future dystopian America where people escape real life into a virtual reality world void of limits. Spielberg said the film is a "flashback to a decade I was very involved in, the 1980s, and flash forward to a future waiting out there for us whether we like it or not." -Reuters