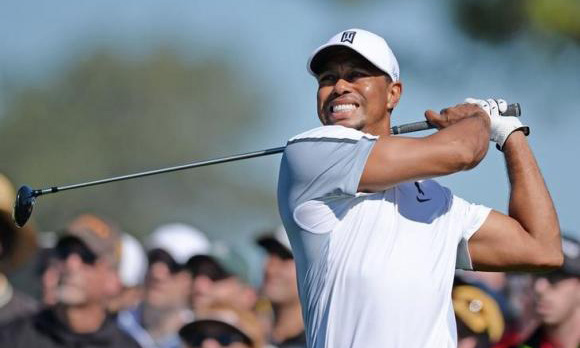 As speculation mounts over whether a shockingly out-of-sorts Tiger Woods will be able to compete at next month's Masters, his good friend Notah Begay III rates his chances of taking part in the year's opening major as "50-50". Woods, a former world number one whose ranking has plummeted to 96th, has played only twice on the 2014-15 PGA Tour and said he would not return until his game was "tournament-ready". "As far as Augusta is concerned ... it's literally a 50-50 chance right now from what I can tell," Begay, who played with Woods on the Stanford University golf team, told digital network 120 Sports on Wednesday. "That's far better odds than what it was, say, three weeks ago. Three weeks ago, I would have said there was maybe a 1-in-10 chance of him playing at Augusta." Woods has not competed since he withdrew from the Farmers Insurance Open early last month after 11 holes because of tightness in his back, and is still adapting to the fifth swing change of his career. He missed the Masters at Augusta last year for the first time in his career after being advised by doctors to have back surgery and his participation this year is in serious doubt given his struggle for form and fitness this season. The 14-time major champion posted the highest score of his professional career as he carded a mind-boggling 11-over-par 82 to miss the cut at the Phoenix Open in January, and many pundits believe he is suffering from the chipping 'yips'. However, Begay, a television analyst with Golf Channel, believes Woods is now settling into his new swing under the supervision of consultant Chris Como. "It was good for him to take a step back, to reassess a variety of different things and do things on his timeline," said Begay, a 42-year-old Native American golfer who won four times on the PGA Tour. "My suggestion to him was to take as much time as he needed to just figure out this issue with his short game and also to work on or clean up a couple of things that might be a little loose with his golf swing. "Any transition, any change that you are making mechanically, takes a little time to settle, so that's what he's done. We've had some good discussions over the last week or so and he feels good about it." - REUTERS