Woods scrambles to 73 in 'good day' at Augusta 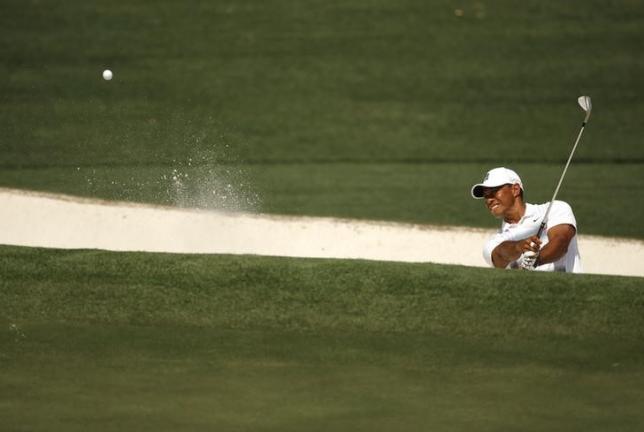 Woods scrambles to 73 in 'good day' at Augusta

AUGUSTA, GEORGIA - Tiger Woods, returning from a two-month hiatus to retool his game, battled some erratic play and scrambled to a one-over 73 in the first round of the Masters and described his uneven performance as, "a good day". The see-saw round of four bogeys and three birdies left him nine strokes off the pace set by 21-year-old Jordan Spieth, who fired an eight-under 64 at Augusta National. When last seen in competition, Woods's short game was shockingly inept, leaving many to wonder if he was suffering from the chipping 'yips', or suffering a mental block as he worked his way back from injury with a new swing coach. "It was a good day. I felt good out there," said the four-times Masters winner, who was tied for 41st as 30 players bettered par on rain-softened greens on a warm, gentle day. "I made maybe two dumb mistakes out there. The only thing I struggled with was the pace of the greens, which were much slower than we expected." However, Woods also showed inconsistency off the tee, fighting his timing and sending balls left and into trouble. But the former world number one used his abundant imagination and power to escape danger. His work around the greens was encouraging with the exception of a three-putt at the first for bogey and a strong chip that denied him a birdie at the third. "That's the strength of my game and that's the way it should be and that's why I worked my butt off and hit thousands and thousands of shots," Woods said. The 39-year-old American, who plunged to 111th as he struggled to return to form following back surgery last year, offset two bogeys with birdies on the par-fives before an adventure-filled bogey at the ninth. The back nine was less turbulent. He bogeyed the par-three 12th with a delicate pitch after his tee shot landed short and rolled down into Rae's Creek, and birdied the par-five 13th to make up the stroke. - Reuters