ISLAMABAD (92 News) – Prime Minister Imran Khan said on Monday that the world also acknowledged the vision of clean and green Pakistan. Addressing a ceremony after inaugurating monsoon tree plantation campaign by planting a sapling in Islamabad on Monday, the prime minister has said that the environmental pollution is becoming problem. “Lahore has only five per cent trees as compare to 1990s,” he said. 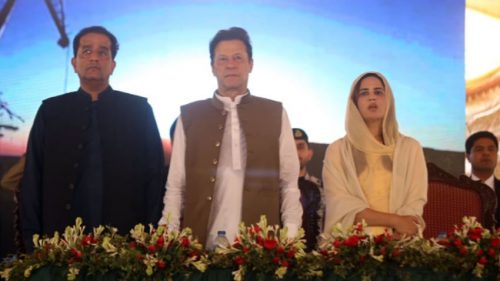 Imran Khan said that the PTI government will achieve the target of planting ten billion trees across the country during its term by involving all the provinces in the national cause. The prime minister expressed resolve to fight the climate change effects by planting trees across the country to protect environment for the future generations. He said the youth has a major role to play in making the tree plantation drive a success. Imran Khan said every Pakistani should plant two saplings on 18th of this month, taking part in the national drive. He said the Forest Department, districts administrations, and other relevant departments will actively participate in tree plantation drive, which will continue for the next four years. The premier regretted that the climate of the country has turned warm due to massive cutting of trees, which can be reversed by planting trees particularly in the urban centers. He said national parks will be developed across the country. He said Pakistan will become an example for the world in making the land green. Imran Khan said PTI made Billion Tree Tsunami project in Khyber Pakhtunkhwa a success, which was also recognized by world environment organizations; and now the nationwide drive will also be pursued effectively. https://www.youtube.com/watch?v=1duYTuRMXmU A day earlier, Minister for Communications Murad Saeed launched a tree plantation drive along Grand Trunk (GT) road under the Prime Minister’s ‘Clean and Green Pakistan Campaign’ to make national highways Eco-friendly. The minister said around 20,000 thousand saplings would be planted on both sides of the N-5 North Zone, one of the longest and busiest section of the GT road, in collaboration with National Highways Authority (NHA), civil society members and volunteers from different schools and colleges. On Saturday, Punjab Chief Minister Usman Buzdar also inaugurated monsoon tree plantation drive at China Park in Lahore.

It's not right to have expectations from  Taliban so early: PM Imran Khan

Opportunity to end 40-year conflict in Afghanistan should not be wasted: PM