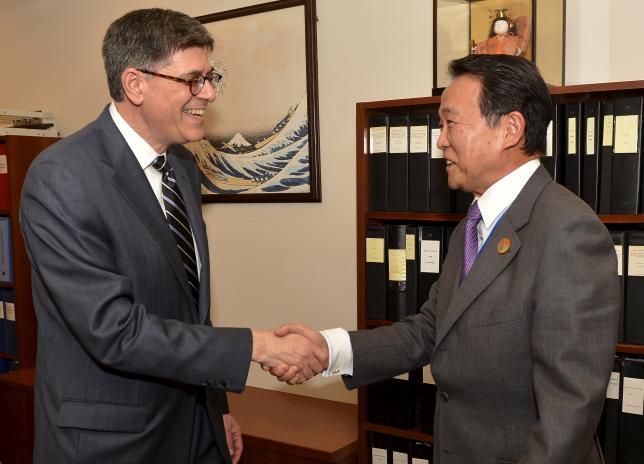 WASHINGTON - The United States and Japan want the World Bank and Asian Development Bank (ADB) to team up with a new Chinese-led development bank in syndicated loans, as a way of helping the new lender establish strong standards, Japan's finance minister said. Washington and Tokyo are leading members of the World Bank and ADB, respectively, and have been wary of joining China's new Asian Infrastructure Investment Bank (AIIB), with US officials in particular voicing concern over its lending standards. Japanese Finance Minister Taro Aso said he and US Treasury Secretary Jack Lew had agreed at a meeting in Washington that syndicated loans involving AIIB and established multilateral lenders would help it meet global standards on governance, debt sustainability and considerations for the environment. "We discussed that one way to help the AIIB heighten such standards would be for it to extend syndicated loans with institutions that already meet high standards such as the World Bank and the Asian Development Bank," Aso told reporters. The meeting was held on the sidelines of the Group of 20 finance leaders' two-day gathering that kicked off on Thursday. Aso said the G20 finance leaders had not touched on the AIIB at their first-day session on the global economy. Washington and Tokyo have given the AIIB a chilly reception, warning that it has yet to embrace the standards established over the last 70 years by the world's big development organizations such as the World Bank. However, Washington's warnings failed to stop its major European allies - Britain, Franceand Germany - from pledging to join the new bank. Japan says it remains cautious of joining the bank unless Beijing enhances governance and transparency. - Reuters