World can turn face from Kashmir but Pakistan never will: FM 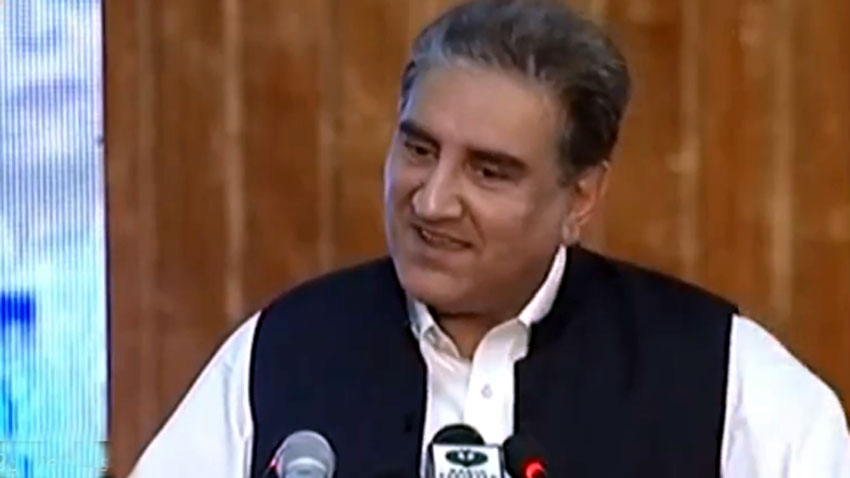 World can turn face from Kashmir but Pakistan never will: FM

PM to effectively present case of Kashmiris in UNGA

The foreign minister said that Prime Minister Imran Khan will effectively present the case of Kashmiris before the upcoming session of UN General Assembly. In his address, he said the premier will represent the aspirations of Pakistani and Kashmiri people.

FM Qureshi has urged the political parties to rise above their political differences and speak with one voice in support of oppressed Kashmiri people at this critical juncture.

He said Modi government has Akhand Bharat mindset and the gravity of situation demands sanity on our part. He said certain political forces should not blow the trumpet which hurts the interests of Pakistan and benefits India.

Shah Mehmood Qureshi said those planning to organize Azadi March should turn it into Azadi March Kashmir. He appreciated the Chairman Senate for holding this conference saying this gives the message that the elected representatives regardless of their differences are united for the Kashmiri people. The Foreign Minister said that Kashmir dispute stands internationalized today and credit for this goes to PM Imran Khan. He pointed out that the UN Security Council held discussions on the festering dispute after a gap of fifty four years despite Indian efforts to get it postponed.

The minister said the UNSC meeting reaffirmed Pakistan’s stance that Kashmir is an internationally recognized disputed territory and it can be resolved only through the UN Charter and the UN Security Council resolutions. He said the EU parliament held discussion on Kashmir dispute last night in which it not only voiced concerns over the prevailing situation in occupied Kashmir but also demanded the resolution of outstanding dispute in accordance with the aspirations of Kashmiri people.

FM qureshi said that the UNHRC at its recent meeting in Geneva also rejected the stance of India on the situation in occupied Kashmir. He said fifty eight members of the council expressed solidarity with the statement presented by Pakistan. He said the western media today is also exposing the true face of India. Meanwhile, the National Parliamentarians Conference was organized by the Senate, political leaders and elected representatives are attending the moot to express their solidarity with their Kashmiri brethren. https://www.youtube.com/watch?v=Awn_c6h29BM