World champion Hamilton fastest in final practice of the season 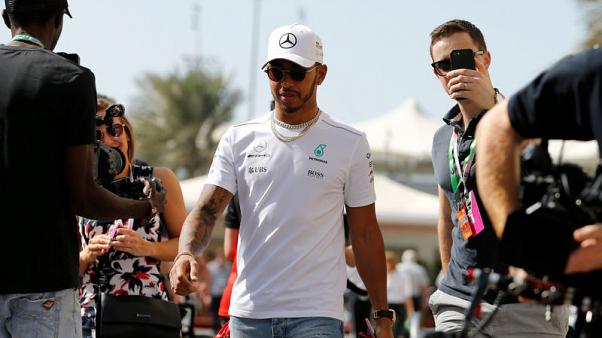 World champion Hamilton fastest in final practice of the season

ABU DHABI (Reuters) - Four times world champion Lewis Hamilton ended the final practice session of the Formula One season with an Abu Dhabi track record and a Mercedes one-two at the top of the timesheets on Saturday.

The Briton, who clinched the title in Mexico last month, lapped in one minute 37.627 seconds with Finnish team mate Valtteri Bottas second and 0.273 slower.

Hamilton, who won at Yas Marina from pole position last year, had set the previous track record of 1:37.877 in Friday practice. Ferrari’s Kimi Raikkonen was third fastest, ahead of team mate and four times champion Sebastian Vettel but half a second behind Hamilton.

The conditions will be different for the later qualifying and Sunday’s floodlit dusk-to-dark race, however.

Vettel is second in the championship, 22 points clear of Bottas and set to become the first non-Mercedes driver in four years to finish the season in the top two.

Hamilton, who can take his 12th pole of the season later on Saturday, is aiming to round out the year with a 10th victory.

The Red Bull pairing of Australian Daniel Ricciardo and Dutch 20-year-old Max Verstappen were fifth and sixth with McLaren’s Fernando Alonso and Stoffel Vandoorne seventh and eighth. The virtual safety car was activated midway through the session when a large white umbrella blew onto the track and had to be retrieved by a marshal.