LONDON (92 News) – England beat Bangladesh by 106 runs in their third match of the 50-over World Cup at Cardiff. Jason Roy made the highest individual score of the World Cup as his 153 runs powered England towards a huge target of 386. Buttler chipped in with 64 off 44, and Plunkett's 27 not out off nine ensured England finished strongly. England finish on 386 for 6, the seventh-highest World Cup total. Jason Roy and Jonny Bairstow gave a 128-run start. Bairstow fell for 51 but Roy carried on and finished with a magnificent 153 off 121 balls. The in-form Roy, however, pressed on, reaching the landmark in 92 balls, including 12 fours and a six. The Surrey batsman collided with umpire Joel Wilson and knocked him to the ground but neither he nor the Trinidad official were unhurt. Roy carried on to surpass this tournament´s previous highest score, Rohit Sharma´s 122 not against South Africa at Southampton on Wednesday. He was finally caught by Mashrafe off the bowling of Mehidy Hasan Miraz for 153, holing out after hitting three sixes in a row off the bowler. Both Roy and Bairstow have come unstuck against spin in this tournament so it was no surprise when Bangladesh opened the bowling with left-arm spinner Shakib Al Hasan. But on a green-tinged, if slow, pitch, England played him comfortably enough. Bairstow fell soon after completing a 48-ball fifty, a leading edge off Mashrafe well caught by Mehidy in the covers to give the Bangladesh skipper his first wicket of this World Cup. Joe Root scored 21 before he played on off the bowling of Mohammad Saifuddin. Mehidy Hasan and Mohammad Saifuddin picked two wickets each while Mustafizur Rahman and Mashrafe Mortaza bagged one wicket respectively.  Earlier, Bangladesh have won the toss and elected to bowl first against. 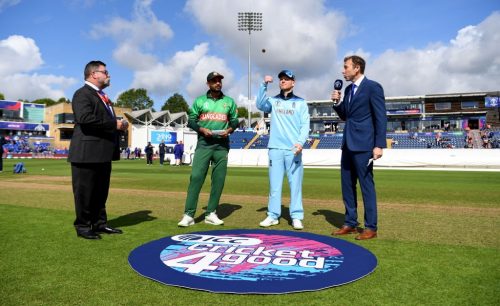 Skipper Mashrafe Bin Mortaza said he hoped that his bowlers could draw some purchase off the surface in the first hour of play, with the covers having remained on the pitch for the last two days. He noted that the conditions could be suitable for playing an extra seamer in the side while naming an unchanged line-up from their previous match against New Zealand. The Tigers will hope to bury the disappointment of an agonising two-wicket loss to the Kiwis at The Oval with a third successive win in World Cup matches against the Three Lions on Saturday. England have made one change to their line-up with fast-bowler Liam Plunkett being included in place of Moeen Ali. The head-to-head record in ODI fixtures between the two sides has been one-sided with England winning 16 of the 20 previous encounters. But the picture is completely different in World Cup matches where the Tigers have claimed two of their four victories against the Three Lions. The Tigers will aim to add to their two-game winning streak against England on the world stage. The run started with a thrilling two-wicket win at Chattogram in the 2011 World Cup. The Tigers followed it up with an historic 15-run triumph against the current World Cup hosts to seal a berth in the knockout stages of the 2015 edition of the showpiece tournament at Adelaide. England's only win at the World Cup against Bangladesh came in 2007. Bangladesh XI: Tamim Iqbal, Soumya Sarkar, Shakib Al Hasan, Mushfiqur Rahman (wk), Mohammad Mithun, Mahmudullah, Mosaddek Hossain, Mohammad Saifuddin, Mehidy Hasan, Mashrafe Mortaza (c), Mustafizur Rahman England XI: Jason Roy, Jonny Bairstow, Joe Root, Eoin Morgan (c), Ben Stokes, Jos Buttler (wk), Chris Woakes, Adil Rashid, Liam Plunkett, Jofra Archer, Mark Wood