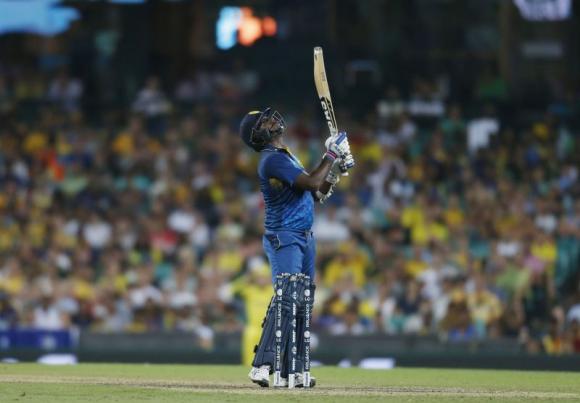 SYDNEY - Sri Lanka skipper Angelo Mathews is looking to overwhelming support from the crowd and a fifth successive century from Kumar Sangakkara to keep his side on track for a third consecutive World Cup final.

Sri Lanka supporters remarkably made up 70 percent of the crowd, and were responsible for most of the noise, when the islanders took on co-hosts Australia at the Sydney Cricket Ground in a pool match two weeks ago.

Mathews is looking for more of the same when they face South Africa in Wednesday's quarter-final at the same ground.

"If you play at the SCG it's like playing at home," he told reporters on Tuesday.

"Most of the Sri Lankans across Australia or across the world, they fly into Sydney with immense support for us, and we really enjoy playing in Sydney.

"It's going to be a tough game for both teams. As we all know, we've come to the business end of the tournament, and whoever makes less mistakes will obviously go on to win."

Like fellow top order batsman Mahela Jayawardene, Sangakkara is playing in his final tournament before retiring from the 50-over format.

Both were losing finalists in 2007 against Australia and against India four years later, and Mathews said the squad were determined to send them off as winners on March 29.

"We've seen Kumar Sangakkara hitting four centuries in a row, and I hope and pray he gets the fifth one tomorrow," he said.

"I'm sure Mahela is a big match player and the top four has to score runs for us to be in contention.

"So hopefully we can make it an historical one winning tomorrow and go into the semis again and hopefully go to the finals and win there and make it historical for two legends."

While South Africa wear the tag "chokers" for their failure to win a single knockout match in six World Cups, 1996 champions Sri Lanka have proved themselves masters of winning in the latter stages of tournaments.

"I think as a team we shouldn't put a lot of pressure on ourselves," Mathews explained. "We just have to approach it positively and aggressively just as we did early in the last first round games.

"That kind of attitude is hard to get rid of. You have to play good cricket, back ourselves and go out there and enjoy ourselves." – Reuters