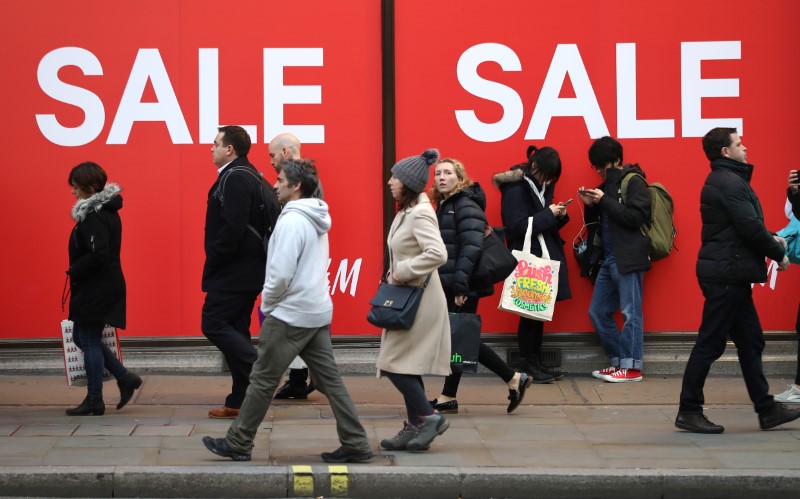 LONDON (Reuters) - British consumers picked up the pace of their spending in June for the second month running, the first back-to-back increases in over a year, a survey showed on Monday, another sign that the economy is past its weak start to 2018. Payment firm Visa said inflation-adjusted spending on its credit and debit cards was 0.7 percent higher than in June last year, helped by warm weather and the soccer World Cup, following a 0.9 percent increase in May. Mark Antipof, chief commercial officer at Visa, said a heatwave and the World Cup had led to particularly strong increases in spending in restaurants and bars. Data has suggested that Britain’s economy grew more strongly in the second quarter of 2018 than in the first three months of the year when a winter slowdown discouraged the Bank of England from raising interest rates. The BoE is expected to raise rates for only the second time since the global financial crisis on Aug. 2. Visa said spending in shops and retail establishments grew more quickly than online for a second month in a row, the first time that has happened since 2012. The better news for high streets could offer some relief to traditional retailers, many of whom have struggled to survive the surge on in e-commerce. The pickup in retail sales is also likely to reflect growing optimism amongst shoppers as inflation weakens and wages grow slightly more quickly. Accountancy firm Deloitte said on Saturday that its measure of consumer confidence in the second quarter hit its highest level since it was launched in 2011. “UK consumers are increasingly confident about opportunities in the jobs market and the security of work,” Ian Stewart, chief economist at Deloitte, said. “With the unemployment rate at a 43-year low and skills shortages on the rise, the stage looks set for gains in real wages.” Annabel Fiddes, an economist at IHS Markit which produced the survey for Visa, said a rate hike by the BoE and uncertainty about Brexit could yet make consumers more cautious. “These key decisions will be crucial in determining the trajectory of the UK economy and consumer spending”, she said.