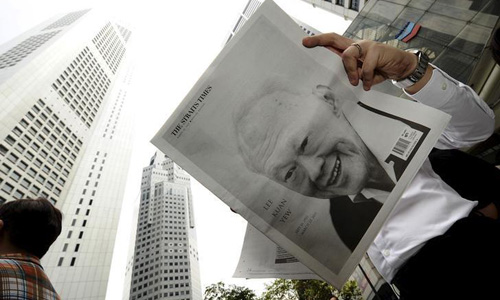 SINGAPORE - World leaders expressed their condolences and paid tribute to Lee Kuan Yew, Singapore's first prime minister, who died on Monday aged 91. INDIAN PRIME MINISTER NARENDRA MODI "A far-sighted statesman and a lion among leaders, Mr Lee Kuan Yew's life teaches valuable lessons to everyone. News of his demise is saddening." FORMER U.S. PRESIDENT BILL CLINTON AND FORMER SECRETARY OF STATE HILLARY CLINTON "Hillary and I mourn the passing of Lee Kuan Yew. Prime Minister Lee transformed Singapore into one of the world's strongest and most sustainable economies. He also firmly established his country as an important friend and partner of the United States. "After leaving office, he continued to offer brilliant analysis and wise advice to those who sought it. We will always be grateful for our fascinating conversations with him over the years. Our thoughts are with Prime Minister Lee Hsien Loong, his entire family, and all the people of Singapore." U.S. VICE PRESIDENT JOE BIDEN "Lee was a visionary leader who spearheaded Singapore's economic growth and helped it become one of the most prosperous countries in the world today. He understood the importance of economic integration and effective governance to building a thriving, modern economy. He was a pragmatist, and sometimes uncompromising. But his commitment to delivering excellence in public service was exemplary." TAIWAN PRESIDENT MA YING-JEOU "Lee was a solid friend to the Republic of China and played a key leadership role in promoting the development of bilateral relations. "Lee was a visionary and world-class leader. Under his leadership, Singapore, in just 50 years, has developed into an important trade hub in Asia with impressive economic strength. "Lee led an unpretentious life. His self discipline was very strict." INDONESIAN PRESIDENT JOKO WIDODO "The late former PM is a close friend of Indonesia, known as the founder of modern Singapore. A great leader and statesman who loves his people, he is also known as an influential political figure in Asia. "Under his leadership, Singapore has transformed itself to be the main economic hub in Asia and brought itself to par with the other developed countries." MALAYSIAN PRIME MINISTER NAJIB RAZAK "I pay tribute to Mr Lee Kuan Yew's determination in developing Singapore from a new nation to the modern and dynamic city we see today. His achievements were great, and his legacy is assured." AUSTRALIAN PRIME MINISTER TONY ABBOTT "Today, we mourn the passing of a giant of our region. Fifty years ago, Lee Kuan Yew led a vulnerable, fledgling nation to independence. Today, thanks to his vision and determination, Singapore is one of the world's most successful countries. "In Lee Kuan Yew's own words, Singapore's remarkable journey has been from 'third world to first'. "Thanks to his leadership, Singapore is now one of the world's most prosperous nations, a financial powerhouse, and one of the world's easiest places to do business. "Our region owes much to Lee Kuan Yew. Here in Australia and beyond, leaders sought and learned from his wise counsel." JAPANESE PRIME MINISTER SHINZO ABE "As the founding father of Singapore, who helped to create the foundations of the prosperity that Singapore enjoys today, he was one of Asia's great leaders. "I would like to offer my deepest condolences to Prime Minister Lee Hsien Loong and his family and also my deepest sympathies to the citizens of Singapore." - REUTERS