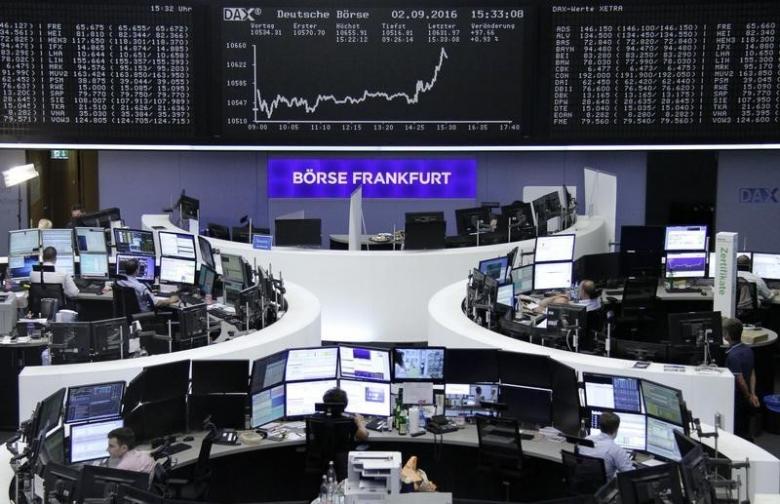 LONDON – World stocks hit their highest in more than a year and the dollar fell sharply against the yen on Wednesday as expectations of a rise in Federal Reserve interest rates receded after weak U.S. economic data.
Emerging market shares led the charge, touching their strongest levels since July 2015 as investors sought yield with interest rates likely to stay low for a prolonged period. But European shares dipped in early trade. The Stoxx 600 index fell 0.2 percent led lower by banks .SX7P, for whom rock-bottom interest rates promise tough times. The index nonetheless remained close to eight-month highs. The top gainers in Europe were energy shares, up 0.7 percent .SXEP, as oil prices rose, even though many market participants remained doubtful producers would reach a deal to freeze output. Euro zone government bond yields fell as some investors bet the weak U.S. data, which followed weaker-than-expected jobs numbers on Friday, would pressure the European Central Bank to ease monetary policy further. Then ECB meets on Thursday. "With a September rate hike looking less likely to happen, the ECB might be more pressured to come up with a decision this week on further measures," said Benjamin Schroeder, senior rates strategist at ING. In Asia, MSCI's main Asia-Pacific stock index, excluding Japan .MIAPJ0000PUS was up 0.2 percent, having earlier touched its highest since July last year. This helped lift MSCI's all-country world index .MIWD00000PUS to its highest since August 2015. "When people think there's no immediate rate hike from the Fed, then Asia and emerging markets are the place to go to, as investors seek yields," said Toru Nishihama, senior economist at Dai-ichi Life Research. Japan's Nikkei index .N225, however, retreated 0.4 percent as a strong yen hurt exporters. DOLLAR, OIL The dollar was last down 0.5 percent at 101.50 yen JPY=, having fallen as low as 101.18, its weakest since Aug. 16. The dollar fell 1 percent against several major currencies on Tuesday after Institute for Supply Management data showing activity in the U.S. service sector slowed to a 6 1/2-year low in August and diminished already slim prospects for a Fed rate hike this month. The dollar index .DXY, which measures the greenback against a basket of major currencies was flat. The euro was down 0.1 percent at $1.1245 while sterling GBP=, which topped $1.34 for the first time in seven weeks on Tuesday after the ISM data, pulled back 0.2 percent to $1.3412. "Clearly, this is a challenging environment for the dollar," said Petr Krpata, currency strategist at ING. The Swedish crown EURSEK= rose around 0.2 percent to 9.52 per euro after the Swedish central bank kept interest rates unchanged, as expected. Oil prices, which have been on a rollercoaster in recent days as expectations of whether a deal to curb a global glut can be reached have waxed and waned, edged up. Brent crude LCOc1, the international benchmark, gained 35 cents to $47.61 a barrel. It rose as high as $49.40 on Monday, having fallen to $45.32 on Sept. 1. The reduced expectations of a Fed hike also lifted other commodities. Copper CMCU3 hit a two-week high at $4,683 a ton, while gold XAU= hit a 2 1/2-week peak above $1,352 an ounce before pulling back. –Reuters