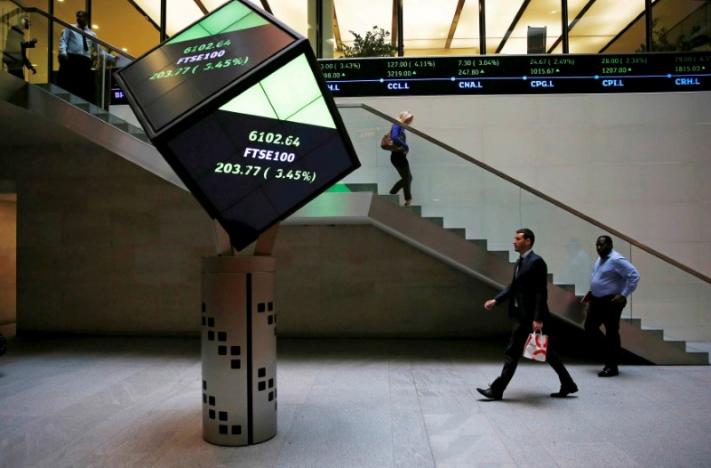 LONDON –World stocks hit record highs on Thursday and the dollar dipped after the U.S. Federal Reserve signaled caution in raising interest rates, while oil prices rose in anticipation of top producers agreeing to extend output cuts for up to a year.

Earlier, Asian stocks, as measured by MSCI .MIAPJ0000PUS gained almost 1 percent to a two-year high after the U.S. S&P 500 index .SPX hit a closing record on Wednesday. This helped push MSCI's 46-country world stock index to a record high of 464.38 percent, up 0.3 percent on the day .MIWD00000PUS.

E-mini index futures ESc1 1YMc1 indicated Wall Street would open higher while the VIX .VIX "fear gauge" of expected volatility in the S&P 500 opened at 9.82, its lowest since May 10.

Brent crude oil LCOc1 rose 55 cents, or more than 1 percent to $54.55 a barrel ahead of a meeting in Vienna, where OPEC and non-member oil producers are expected to extend output cuts for at least nine and possibly 12 months.

James Woods, analyst at Rivkin Securities, said an extended production cut was already "factored into the price of oil".

"OPEC officials prefer ... to wait and see the impact of an extension in helping rebalance the market prior to taking any more drastic actions," he said.

However, the main factor in markets overnight was the minutes of the Fed's May 2-3 meeting. They showed policymakers agreed they should hold off on raising rates until it was clear a recent slowdown in the U.S. economy was temporary, though most said a hike was coming soon.

Fed staff proposed a plan to wind down the more than $4 trillion of debt securities amassed as part of efforts to stimulate the economy. In a move some investors cited as reassuring, the plan included a limit on how much would be allowed to fall off the balance sheet each month.

Federal funds futures imply traders see an 83 percent chance of a rate rise in June and a 46 percent probability of two increases by the end of 2017, according to the CME Group's FedWatch tool.

U.S. Treasury yields dipped after the minutes, weakening the dollar. The benchmark 10-year yield US10YT=RR was down 1 basis point on Thursday at 2.26 percent.

Euro zone borrowing costs also fell after what was seen as a sign central banks would be wary of stepping back too quickly from ultra-loose policies that have supported their economies.

Despite signs of economic recovery, many in markets worry that a precipitate withdrawal of stimulus could cause turbulence.

"The BOJ (Bank of Japan) and the ECB (European Central Bank) are the ones with the long-standing structural weaknesses and there are bigger fears about the risk of a taper tantrum," said Chris Scicluna, head of economic research at Daiwa Capital Markets.

"The minutes, while leaving the door open for another rate hike weren't as hawkish as some investors had been expecting - there had been speculation ahead of time that hawkish tones could be quite supportive for the dollar," said Alexandra Russell-Oliver, currency analyst at Caxton FX in London.

The yen, though, fell 0.2 percent to 111.75 per dollar JPY=, helping nudge Tokyo stocks .N225 up 0.4 percent at the close. The Canadian dollar CAD= hit its strongest since mid-April at C$1.3389 per U.S. dollar after the Bank of Canada kept interest rates unchanged and gave a more upbeat assessment of the economy than some investors had expected. –Reuters